This is a printer version of an UnderwaterTimes.com article.
To view the article online, visit: http://www.underwatertimes.com/news.php?article_id=74503291861 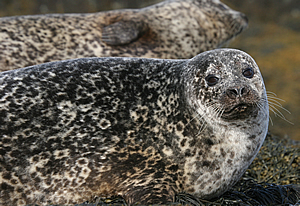 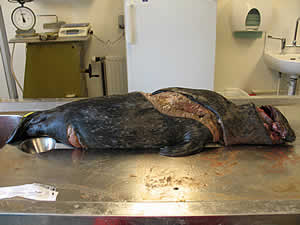 Scientists investigating the mysterious spate of fatal âcorkscrewâ injuries to seals believe that boats are to blame. credit University of St Andrews

ST ANDREWS, Scotland -- Scientists investigating the mysterious spate of fatal 'corkscrew' injuries to seals in the UK believe that boats are to blame.

The preliminary findings from a report by experts at the University of St Andrews reject previous claims that the unusual fatalities marked with spiral-shaped lacerations were caused by sharks.

Researchers at the University's Sea Mammal Research Unit (SMRU), in conjunction with the RSPCA and the SAC (Scottish Agricultural College), set out investigate the carcasses of seals washed up on the east coast of Scotland and England two months ago.

Their initial reports conclude that the injuries were most likely caused by the ducted propeller systems on ships operating in shallow coastal waters. The findings eliminate most other possibilities including the effects of fisheries, deliberate mutilation, the effects of illegal traps and predation by killer whales or sharks.

Since their initial discovery in August 2009, the team have undertaken painstaking studies of more than 30 carcasses washed up with a single, smooth-edged cut starting at the head and spiralling around the body.

The researcher leading the investigation, Dr David Thompson, commented, "Investigations have revealed a number of features that show the injuries are entirely consistent with the animals being sucked through large ducted propellers.

"Our methods included scaled simulations using models that show how the spiral injuries can be created, as well as fine-scale observation of the injuries themselves that show the lacerations were made by the seals rotating against a smooth edged blade while at the same time being dragged past the blade by a powerful force.

"Most diagnostic of all has been the imprint on some animals of the serrated 'rope cutter' that is present on most of these types of ducted propellers to stop ropes getting entangled in the propellers," he explained.

To date, most of the injuries have been seen in animals washed up in north Norfolk, in the Tay and Forth estuaries in Scotland and in Strangford Lough in Northern Ireland. The injuries themselves involve a severe, sudden and deadly trauma leaving the animals with a characteristic laceration injury that starts at the head and travels in a smooth spiral for the length of the body. Both grey and harbor seals have been involved but the carcases recovered were mainly harbor seals.

At present the evidence suggests that the incidence of the 'corkscrew' injuries may be isolated to specific regions and circumstances where ships with appropriate drive systems are operating in shallow water. However, the team have yet to understand why the seals would place themselves at risk of being sucked into these propellers in the first place.

Dr Thompson continued, "There has been a lot of confusion as a result of a television documentary screened recently that claimed to show that Greenland sharks were responsible for similar types of injuries to seals in Canada. We are certain that this is not the cause of the injuries here and are also of a view that many of the cases from Canada are unlikely to be caused by sharks."

Future studies, dependent upon funding, will concentrate on research that might provide a solution to the problem, especially as it is possible that this type of injury may be more widespread than the existing cases suggest.

Professor Ian Boyd, Director of SMRU and the Scottish Oceans Institute commented, "We are all very concerned to find out why this has happened.

It is slightly suspicious that we have observed these injuries in places where researchers with appropriate knowledge are most likely to find them, which leaves me thinking that we might only be seeing the tip of the iceberg.

"But we hope that the current observations are an isolated case reflecting very specific circumstances that, once understood, can be avoided in future through simple changes to the operational procedures of the vessels involved."