This is a printer version of an UnderwaterTimes.com article.
To view the article online, visit: http://www.underwatertimes.com/news.php?article_id=74261835910 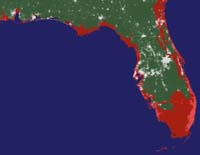 The red and pink colors depict the areas of Florida that would be submerged if the sea rose 20 feet.

TUCSON, Arizona -- The Earth's warming temperatures are on track to melt the Greenland and Antarctic ice sheets sooner than previously thought and ultimately lead to a global sea level rise of at least 20 feet, according to new research.

If the current warming trends continue, by 2100 the Earth will likely be at least 4 degrees Fahrenheit warmer than present, with the Arctic at least as warm as it was nearly 130,000 years ago. At that time, significant portions of the Greenland and Antarctic Ice Sheets melted, resulting in a sea level about 20 feet (six meters) higher than present day.

These studies are the first to link Arctic and Antarctic melting during the Last Interglaciation, 129,000 to 116,000 years ago.

"This is a real eye-opener set of results," said study co-author Jonathan T. Overpeck of The University of Arizona in Tucson. "The last time the Arctic was significantly warmer than present day, the Greenland Ice Sheet melted back the equivalent of two to three meters (about six to ten feet) of sea level."

Contrary to what was previously believed, the research suggests the Antarctic ice sheet also melted substantially, contributing another six to 10 feet (two to three meters) of sea level rise. The new findings will be published in the March 24 issue of Science.

Co-author Bette Otto-Bliesner of the National Center for Atmospheric Research in Boulder, Colo., said, "Although the focus of our work is polar, the implications are global. These ice sheets melted before and sea levels rose. The warmth needed isn't that much above present conditions."

The ice sheets are melting already. The new research suggests the melting could accelerate, thereby raising sea level as fast, or faster, than three feet (about one meter) of sea level rise per century.

Although ice sheet disintegration and the subsequent sea level rise lags behind rising temperatures, the process will become irreversible sometime in the second half of the 21st century, Overpeck said, "unless something is done to dramatically reduce human emissions of greenhouse gas pollution.

"We need to start serious measures to reduce greenhouse gases within the next decade. If we don't do something soon, we're committed to four-to-six meters (13 to 20 feet) of sea level rise in the future."

Overpeck, a professor of geosciences and director of Institute for the Study of Planet Earth at The University of Arizona, Otto-Bliesner and their colleagues report their new findings in a pair of papers. A complete list of authors is at the end of this release. The National Science Foundation funded the research.

The researchers used a computer model that scientists use to predict future climate, the NCAR-based Community Climate System Model (CCSM), and combined it with ice sheet simulations to estimate what the Earth's climate was like 129,000 years ago.

The CCSM did a good job of estimating past climate changes. That gives the researchers additional confidence in the model's predictions of future climate change, Otto-Bliesner said.

The work shows that meltwater from Greenland and other Arctic sources raised sea level by as much as 10 feet (about three meters) during the Last Interglaciation. However, coral records indicate that the sea level actually rose 13 to 20 feet (four to six meters) and sediments under the West Antarctic Ice Sheet indicate parts of the ice sheet disappeared.

Antarctic melting must have produced the additional sea-level rise, Overpeck concludes. He said the rise in sea level from melting in the Arctic could have destabilized parts of the Antarctic ice sheet.

In the last few years sea level has begun rising more rapidly, Overpeck said. He's concerned, because unlike the Greenland Ice Sheet, the base of the West Antarctic Ice Sheet is below sea level. If it starts to melt, it could go fast, he said. Moreover, during the Last Interglaciation, most of the warming was in the Arctic and only in summer. Now the Earth is warming at both poles year round.

"To get rid of Greenland's ice, you have to melt it. In the Antarctic, all you have to do is break up the ice sheet and float it away and that would raise sea level," he said. "It's just like throwing a bunch of ice cubes into a full glass of water and watching the water spill over the top."

Overpeck said the team's next step will be developing a more precise estimate of the threshold of ice sheet and sea level change beyond which major sea level rise is inevitable.