This is a printer version of an UnderwaterTimes.com article.
To view the article online, visit: http://www.underwatertimes.com/news.php?article_id=74168910052 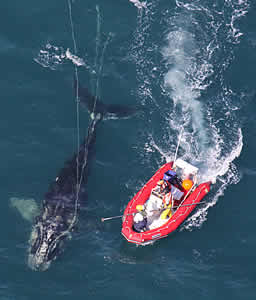 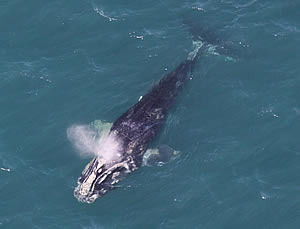 SILVER SPRING, Marlyand -- Scientists from NOAA Fisheries Service and its state and nonprofit partners successfully used at-sea chemical sedation to help cut the remaining ropes from a young North Atlantic right whale on January 15 off the coast of Cape Canaveral, Fla. The sedative given to the whale allowed the disentanglement team to safely approach the animal and remove 50 feet of rope which was wrapped through its mouth and around its flippers.

"Our recent progress with chemical sedation is important because it's less stressful for the animal, and minimizes the amount of time spent working on these animals while maximizing the effectiveness of disentanglement operations," said Jamison Smith, Atlantic Large Whale Disentanglement Coordinator for NOAA's Fisheries Service. "This disentanglement was especially complex, but proved successful due to the detailed planning and collective expertise of the many response partners involved."

The young female whale, born during the 2008-2009 calving season and estimated to be approximately 30 feet long, was originally observed entangled on Christmas Day by an aerial survey team. On December 30, a disentanglement team of trained responders from Georgia Department of Natural Resources and Florida Fish and Wildlife Conservation Commission were able to remove 150 feet of rope from the whale, but additional rope remained. NOAA and its partners continued to track the animal via satellite tag to determine if the animal would shed the remaining gear on its own. Calm weather conditions were necessary before attempting further intervention on January 15.

During this response, scientists used for the first time a special digital monitoring tag which recorded the whale's behavior before, during, and after sedation. Sedating large whales at sea is in its infancy and data collected from the digital archival tag will be used to inform future sedation attempts that may be necessary. After disentangling the whale, scientists administered a dose of antibiotics to treat entanglement wounds and drug to reverse the sedation. The whale will be tracked up to 30-days via a temporary satellite tag.

Fishing gear removed from this whale included ropes and wire mesh material, similar to what is found in the trap or pot fisheries for fish, crab and lobster along the mid-Atlantic, northeast U.S., and Canadian coasts. However, the specific fishery and its geographic origin are pending examination by experts at NOAA's Fisheries Service.