This is a printer version of an UnderwaterTimes.com article.
To view the article online, visit: http://www.underwatertimes.com/news.php?article_id=74106023981 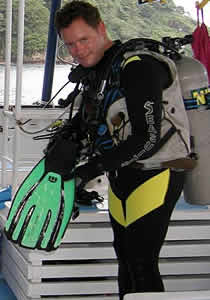 Dr. Peter Mumby is the 2011 recipient of the Rosenstiel Award for his studies on coral conservation strategies. credit P. Mumby

MIAMI, Florida -- The University of Miami Rosenstiel School of Marine and Atmospheric Science is proud to announce that Dr. Peter Mumby is the 2011 recipient of The Rosenstiel Award, one of the School's top honors. Mumby, a British marine ecologist and professor at Australia's University of Queensland, is the 37th recipient of the Rosenstiel Award. His goal is to understand the benefits and limitations of conservation strategies for coral reefs.

Mumby began his career in 1992 as a Science Coordinator at the Coral Cay Conservation in Belize designing marine reserves, before moving on to the University of Sheffield where he received his Ph.D. in coral reef remote sensing. Afterwards, he took on two research fellowships at University of Newcastle and the University of Exeter in that respected order, before his current work at Queensland. Now, Mumby is in the middle of a prestigious five-year Australian Research Council Laureate fellowship. His worked has been published 85 journal articles, seven book chapters, and two books, including several first-author papers in Science and Nature.

Mumby and colleagues have studied the impacts of marine reserves on Caribbean reefs and discovered that the direct effects of protecting fish can have profound indirect effects on the ecosystem. His findings have helped provide insight into the consequences of conserving herbivorous fishes, reducing nutrient runoff, conserving mangroves, and restoring urchin populations. Mumby's research has influenced conservation policy, contributing to the implementation of a ban on herbivore exploitation in Belize and the identification of a marine park at Conception Island in the Bahamas.

"Professor Mumby is a leading figure in coral reef science, whose work spans the fields of remote sensing, connectivity, ecology, and climate change. It is extremely rare for someone to have made such lasting contributions to such a broad range of fields at such an early stage in their career. Pete's engaging personality and keen sense of humor belie great intelligence, dedication, and drive. With the future of coral reefs currently hanging in the balance, it's good to know that scientists like Professor Mumby have dedicated themselves to finding ways to help these ecosystems persist and thrive over the next few decades," says Dr. Andrew Baker, an Associate Professor at the Rosenstiel School who nominated Mumby.

A dinner to celebrate and acknowledge Mumby's achievements will be held on April 6 at the Rosenstiel School.