This is a printer version of an UnderwaterTimes.com article.
To view the article online, visit: http://www.underwatertimes.com/news.php?article_id=74105610289 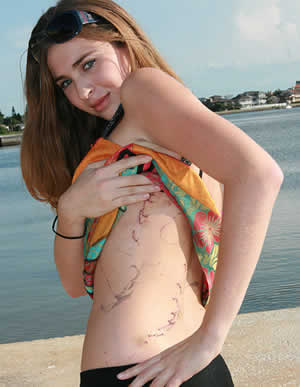 SARASOTA, Florida -- An American student has described the moment she was bitten by a shark in an attack that almost punctured her lungs and left her needing more than 100 stitches.

Andrea Lynch, 20, said she was lucky to be alive after being attacked as she enjoyed a late-night swim with friends during a boat trip off Sarasota Bay in Florida.

As she floated on her back, the shark, believed to be a 7ft-long bull shark, sank its razor-sharp teeth into her side until they hit her ribs and pelvis.

It shook her briefly before letting go.

Ms Lynch was left with 17 wounds in the attack, which happened last week.

"I got on the boat and my friend was, like, 'Do I need to call 911?' [the emergency services]," she told the Sarasota Herald-Tribune newspaper.

"I reached back with my hand and felt all these gashes on me, and there was blood running down my body and pooling in the boat," she added.

The shark attack was reported to be the second near Sarasota Bay this year, although they are relatively rare on the coast of Florida compared with the more perilous waters of Australia and South Africa.

However, the potential severity of any shark attack - even by smaller sharks like the bull - was underlined when doctors said that Mr Lynch's lungs were very nearly bitten through in the attack.