This is a printer version of an UnderwaterTimes.com article.
To view the article online, visit: http://www.underwatertimes.com/news.php?article_id=73891015620 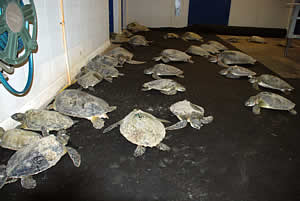 SOUTH PADRE ISLAND, Texas -- Hundreds of rare sea turtles stunned by the longest spate of sub-freezing days in decades in South Texas are to be returned to the wild today and tomorrow. As of this morning, more than 800 sea turtles had been rescued from freezing bays and beaches in Texas in the past three days, with more expected to be rescued today and tomorrow.

In past years for similar coastal freezes, cold-stunned sea turtles in Texas have typically been held in captivity to recuperate for weeks until sea water temperatures rose. But two factors have prompted Texas wildlife workers to return turtles to the wild faster. First, experts in Florida who've had similar recent experiences with cold-stunned turtles advised returning them to the water as soon as possible. Second, the sheer numbers of rescued turtles have overwhelmed available facilities, so that many are on floors or wrapped in blankets, and experts say it's better for them to return to water.

"There is no doubt we saved these turtles' lives; they would have perished in the cold if left on the bays and beaches," said Donna Shaver, who for years has led sea turtle recovery efforts for Padre Island National Seashore, and is the Texas coordinator for the national Sea Turtle Stranding and Salvage Network. Shaver said the recent cold wave has caused the largest cold-stunning of sea turtles since the national stranding network was formed in 1980.

Between 3-4 p.m. today, the first turtle release will take place on the beach at Isla Blanca County Park at the southern most tip of South Padre Island. This release will include more active and healthy sea turtles held at local facilities. As of this morning, more than 700 turtles were being held in far South Texas, including about 300 at Gladys Porter Zoo in Brownsville, about 125 at Laguna Atascosa National Wildlife Refuge, about 250 at the University of Texas-Pan American coastal studies lab, and about 50 at the facility of nonprofit Sea Turtle, Inc.

"This has been a huge community effort, from Donna Shaver's folks to other federal staff with the U.S. Fish and Wildlife Service and Texas Parks and Wildlife Department, right down to little eight-year-old kids pulling sea turtles out of the freezing muck," said Jeff George of Sea Turtle, Inc. "It's another example of the community pulling together for our rare species."

Also around 3-4 p.m. today, more than 50 sea turtles that had been held at the Gladys Porter Zoo are to arrive at the state fish hatchery operated by TPWD in Flour Bluff near Corpus Christi. The state agency's Coastal Fisheries Division staff and game wardens have been out on beaches and in boats for days helping rescue stranded turtles. Today they used fish hatchery trucks to transport some of the weakest turtles that still need indoor recuperation from the Valley to the Corpus area.