This is a printer version of an UnderwaterTimes.com article.
To view the article online, visit: http://www.underwatertimes.com/news.php?article_id=73410015896 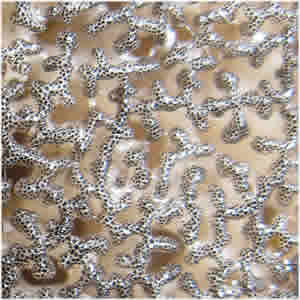 Close-up shot of tiny pores in the filter-feeding pad of a whale shark. Credit: Dr. Philip Motta/University of South Florida 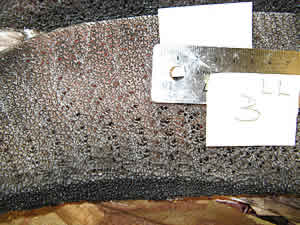 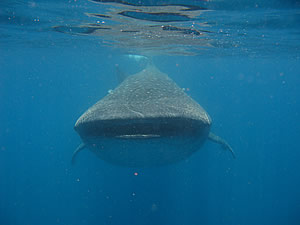 SARASOTA, Florida -- How does earth's biggest fish dine on the tiniest marine critters? New research reveals how whale sharks filter feed in the wild and links their feeding anatomy, behavior and ecology as never before.

This study, recently published in the journal Zoology, is the most comprehensive to date on the unique feeding system that sets whale sharks apart from all other fishes.

This research suggests that whale sharks might filter their food through a process also used in human-engineered machinery, and that this delicate filtration system is likely vulnerable to oil spills and other environmental threats.

To understand this complex feeding system, scientists from the United States and Mexico combined detailed anatomical research with long-running surveys of whale shark feeding behavior and ecology in the wild.

"One of the most important features of this project is that it's so comprehensive," says the study's lead author, Dr. Philip Motta, professor of biology at the University of South Florida. "Not only is it the most detailed study of whale shark feeding anatomy to date, but it also provides the first mathematical model of their filter feeding process and the first estimate of how much these sharks eat in the wild."

Understanding how whale sharks feed is a key step toward conserving the species, which is deemed vulnerable by the International Union for Conservation of Nature. Resource managers can use this knowledge to maintain and protect habitats these animals depend on for survival.

The study is titled "Feeding anatomy, filter-feeding rate, and diet of whale sharks Rhincodon typus during surface ram filter feeding off the Yucatan Peninsula, Mexico." The research team included investigators from the University of South Florida, Mote Marine Laboratory, the Georgia Aquarium, Proyecto Domino (Domino Project in Mexico), Mexico's Comision Nacional de Areas Naturales Protegidas and the University of California, Irvine. The team studied whale sharks as the animals gathered en masse to dine on plankton blooms in the Gulf of Mexico and Caribbean Sea waters near Isla Holbox, Mexico, to feed from May to September.

Ongoing research by Proyecto Domino, in which Mote Marine Laboratory and the Georgia Aquarium are partners, has shown that as many as 1,400 whale sharks visit the area annually. The aggregation of sharks â the largest known in the world â gave the researchers a rare opportunity for comprehensive studies of the elusive species, which spends most of its time traveling long distances underwater.

The researchers found that, for most of the day, the whale sharks swam at or near the surface, angled upward about 13 degrees with their open mouths submerged or peeking above water. Whale sharks sought plankton patches dominated by tiny crustaceans called sergestid shrimp and calanoid copepods, along with predatory worms called chaetognaths.

The whale sharks swam to "ram" water and food through the filtering pads covering the entrance to their throats â a process called ram feeding. Water passes through while large enough food particles are caught and carried to the throat in a process researchers are still describing.

The team also took photographs and made detailed measurements to describe the 20 filter-feeding pads and surrounding structures in the mouths of whale sharks that live at the Georgia Aquarium in Atlanta. They also took tissue samples from deceased whale sharks.

Until now, the most detailed study of whale sharks' filter feeding anatomy was a paper in 1941. The current study adds much greater detail â including measurements of the tiny pores in the filter pads.

"The mesh pads filter feed very efficiently," Motta said. "What's unique is that they don't clog that quickly. We suggest that may be because they use cross-flow filtration."

Cross-flow filtration is a process used by commercial beverage manufacturers to filter liquids. The liquid moves parallel to a slanted filter and debris is carried to the back, rather than immediately entering â and quickly clogging â the filter pores.

But environmental contaminants might block these fine filters, the researchers said. "We don't know for certain, but we suspect oil would clog the filters because all the water that these animals breathe must pass through those filters before reaching the gills," said Dr. Robert Hueter, Director of Mote's Center for Shark Research and leader of Mote's field studies on whale sharks.

Scientists aren't sure how the Deepwater Horizon oil spill affected whale sharks, which are known to inhabit the northern Gulf of Mexico. Dr. Hueter and other Mote scientists will soon begin a two-year study assessing the spill's effects on whale sharks and other large sharks. The current feeding research was based on sharks in oil-free waters of the southern Gulf.

To relate whale sharks' filter feeding anatomy to their behavior in the ocean, scientists monitored and took videos of 33 whale sharks from 2006-2008 in waters off Mexico's Yucatan Peninsula. They estimated how much time sharks spent skimming the surface for plankton, how fast they moved and how much water entered their mouths. They also collected plankton near the sharks to determine its size, species and nutrition content.

Mote scientists, who led the field portion of the research, have studied whale sharks in Mexican waters since 2003 to reveal local feeding hotspots, monitor feeding behaviors and record the animals' movements and diving behaviors by attaching external tags, including satellite-linked tags. Studying whale sharks' daily habits is crucial for determining how often they feed and what they eat.

The team combined field observations with anatomy to make the first mathematical model of how fluid flows into whale sharks' mouths, carrying food to their filter pads. With this model they estimated that, at their study site, a whale shark about 20 feet long filters 614,000 liters per hour of water and eats 6,721 calories.

Healthy humans should eat 1,600 to 3,000 calories per day depending on activity level, age, sex and other factors, according to U.S. dietary guidelines.

If the gap between humans and whale sharks seems small, part of the reason might be that humans burn extra calories to maintain a constant body temperature, while sharks do not. Also, the researchers say that this first-ever estimate could be on the low side. Whale sharks might be eating more at other sites with denser amounts of plankton.

Future studies of whale shark feeding can build upon the methods pioneered here, the researchers say.

"It's important that our project covered whale shark feeding from every angle, from structure and morphology through behavior and ecology," Hueter said. "Often you see anatomy papers with beautiful descriptions of morphology and suggestions about its function. We looked not only at function, but also to the ecological level and the role that feeding plays in these animals' conservation needs.

Dr. Samuel Grueber, founder and director of the Bimini Biological Field Station, a shark research facility in the Bahamas, said the current study is a crucial step toward a big-picture understanding of whale shark feeding.

"Drs. Motta and Hueter [and their colleagues] have gone a long way with their amazingly detailed anatomical, physiological and biophysical opus toward debunking many of the myths about the behavior, feeding mechanism and bioenergetics in this biggest of all fishes in the ocean." said Gruber, who is also a shark biologist at the University of Miami. (Gruber is not affiliated with the current study.)

To build upon this study, the researchers emphasize the need for studies on how whale sharks feed over longer periods of time, such as during their deep dives to more than 6,000 feet deep and in areas with more food or less available food.

"This paper represents a big step forward in our understanding of one of the largest and most enigmatic animals in the sea," says Dr. Alistair Dove, senior scientist at the Georgia Aquarium.

"By collaborating in a comprehensive approach to the question of how whale sharks feed, the team uncovered some surprising new findings, like the way whale sharks can filter particles smaller than the pore spaces in their filters," says Dr. Dove. "Nature comes up with remarkable solutions, even for something as seemingly simple as sifting food out of water. It just goes to show how much there is yet to learn about these amazing animals, and how precious they are."