This is a printer version of an UnderwaterTimes.com article.
To view the article online, visit: http://www.underwatertimes.com/news.php?article_id=72601089153 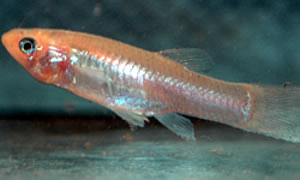 RALEIGH, North Carolina -- There's a reason to be afraid of the dark.

Fish accustomed to living near the light of the water's surface become proverbial "fish out of water" when they move to dark environments like those found in caves, according to a study from North Carolina State University.

In research published this week in Biology Letters, a Royal Society scientific journal, NC State post-doctoral researcher RÃ¼diger Riesch and colleagues found that Atlantic molly females from regular surface streams have a difficult time adjusting to cavelike conditions. Surface female fish had trouble reproducing in the dark conditions, study results show. In addition, many surface-dwelling females introduced to dark conditions â surprisingly, according to the researchers â suffered from high incidents of stress-induced bacterial columnaris disease, or "fin rot," which causes patchy lesions on the bodies of the fish.

"Permanent darkness severely hampers reproduction in surface-dwelling females," Riesch says. "But this study also shows that the successful colonization of a subterranean habitat must have been a rare event for Atlantic mollies."

The study was designed to provide an answer to why Atlantic mollies â their scientific name is Poecilia mexicana â living close to each other in and near a cave in southern Mexico can evolve in different ways. These population differences are normally attributed to geographic separation â like mountain ridges or some other physical barrier â but no physical barrier exists in or around the cave where these Atlantic mollies live.

In the study, the researchers placed some Atlantic mollies in cavelike total darkness while others received a "normal day" of 12 hours of light and 12 hours of darkness.

One explanation for the results, Riesch says, has to do with the amount of resources fish have available for reproduction. A fish that has evolved in light has difficulties navigating and finding food in darkness, resulting in reproductive failure.

"Light and dark can completely disrupt life and reproduction for certain fish, and specific key adaptations are necessary to survive in caves," Riesch says. "This study may be one answer to why fish of the same species living side by side can be so different."

The research was funded by the National Science Foundation.