This is a printer version of an UnderwaterTimes.com article.
To view the article online, visit: http://www.underwatertimes.com/news.php?article_id=71810632095 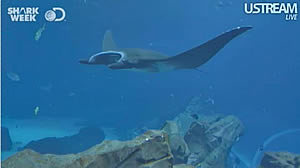 The Discovery Channel's Sharkcam has gone live at the Georgia Aquarium

NEW YORK, New York -- After more than 6 years in the development, a camera that can broadcast sharks and manta rays live over the Internet is live at the Georgia Aquarium in Atlanta. Operated by the Discovery Channel for Shark Week 2011, the camera provides for a real-time view of the three manta rays that inhabit the world's largest aquarium along with four whale sharks and a host of other fish. The high-definition camera was provided by Ocean Presence Technologies that is now manufacturing a new improved version of the original manta camera.

Discovery Channel and the Georgia Aquarium are teaming up to provide a live "fish-eye" view of a variety of sharks living within the world's largest indoor aquatic habitat, the Ocean Voyager.

Ocean Presence's OPT-02HD AquariCam is now live within the Georgia Aquarium's shark tank. It offers a 360-degree panoramic live-stream of the underwater experience as provided by Discovery.com and the Discovery Channel. The live broadcast begins July 14 through Discovery's annual Shark Week, July 31 - Aug. 6, 2011.

Ocean Voyager at the Georgia Aquarium is the world's largest indoor ocean habitat containing more than six million gallons of saltwater. Built by The Home Depot, it was specially designed to house whale sharks, the largest fish species in the world. It has 4,574 square feet of viewing windows, a 100-foot-long underwater tunnel and is the second largest viewing window in the world.

Schools of jacks, squadrons of small and large stingrays, enormous goliath grouper and six different kinds of sharks including whale sharks, blacktip reef, spotted wobbegong, zebra, sandbar and sand tiger sharks circle in the spacious aquarium. In addition to four massive whale sharks, the Georgia Aquarium has two large manta rays, the world's largest winged creature. In 2008, Nandi was brought from South Africa to the Georgia Aquarium. With the addition of two more manta rays, the Georgia Aquarium is now the only aquarium in the United States to house three manta rays and is one of only four aquariums in the world that has mantas.

Discovery.com is the only Internet broadcast where manta rays and whales sharks can be viewed live.

They will also provide real-time chat with experts from within the Ocean Voyager. Shark Week, in its 24th year, will kick off July 31 and be hosted by Saturday Night Live's Andy Samberg.

The Discovery SharkCam can be viewed at: SharkWeek or at The Manta Network.