This is a printer version of an UnderwaterTimes.com article.
To view the article online, visit: http://www.underwatertimes.com/news.php?article_id=71091582346 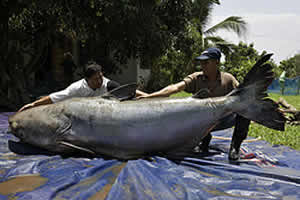 This 646 Pound Giant Catfish was Caught in 2005 in Thailand. credit Suthep Kritsanavarin 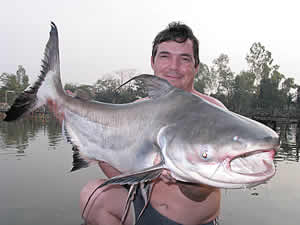 Dead fowl and dogs have been used to catch the dog-eating catfish. credit Jean-Francois Helias

WASHINGTON, D.C. -- Wild populations of the iconic Mekong giant catfish will be driven to extinction if hydropower dams planned for the Mekong River go ahead, says a new report by World Wildlife Fund (WWF).

The hydropower dam planned on the Mekong River at Sayabouly Province, northern Laos, is a threat to the survival of the wild population of Mekong giant catfish. The Sayabouly dam is the first lower Mekong River mainstream dam to enter a critical stage of assessment before construction is approved by the Mekong River Commission, which includes representatives from Cambodia, Laos, Thailand and Vietnam.

"A fish the size of a Mekong giant catfish cannot swim across a large barrier like the Sayabouly dam to reach its spawning grounds upstream," said Dekila Chungyalpa, Director of WWF's Greater Mekong Program. "Building this and other dams will lead to the collapse of the wild population of this iconic species."

Current scientific information suggests the Mekong giant catfish migrate from the Tonle Sap Lake in Cambodia up the Mekong River to spawn in northern Thailand and Laos. Any dam built on the lower Mekong River mainstream will block this migration route.

The other Mekong giant fish featured in the report are the dog-eating catfish, named because it has been caught using dog meat as bait, and the giant barb, the national fish of Cambodia and largest barb in the world. At 661 pounds each, these fish tie for fifth place on the global top ten.

The impacts of lower Mekong River mainstream dams are not restricted to these Mekong giants; they would also exacerbate the impacts of climate change on the Mekong River Delta, one of the world's most productive regions for fisheries and agriculture.

Building the Sayabouly dam would reduce sediment flowing downstream to the Mekong River Delta, increasing the vulnerability of this area to the impacts of climate change like sea level rise.

''The Lower Mekong is currently free-flowing but the clock is ticking,'' Chungyalpa said. "We have a rare opportunity to conserve these freshwater giants and ensure the livelihoods of millions of people who live along the Mekong mainstream."

WWF supports a delay in the approval of the mainstream dams, including the Sayabouly dam, to ensure a comprehensive understanding of all the positive and negative impacts of their construction and operation.

To meet immediate energy demands, WWF promotes sustainable hydropower projects on tributaries of the Mekong River, prioritizing those that already have hydropower dams developed on them.