This is a printer version of an UnderwaterTimes.com article.
To view the article online, visit: http://www.underwatertimes.com/news.php?article_id=71005149238 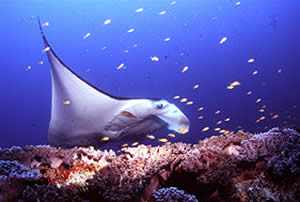 Manta rays are one of the ocean's mysteries. Photo: Andrea Marshall

QUEENSLAND, Australia -- Manta rays are hard to miss —big, black and stretching up to seven metres wide, but scientists are still in the dark about the world's largest ray.

A team of UQ scientists is joining forces with industry and government partners to launch the most comprehensive study of manta rays yet.

One of the project's lead scientists, Dr Kathy Townsend, said little was known about manta rays, which were listed as vulnerable by the World Conservation Union.

“Manta rays are a big ecotourism drawcard, forming the basis of multimillion dollar industries around the globe,” Dr Townsend said.

“Our research focuses on the population of manta rays along the eastern seaboard of Australia and includes Moreton Bay and the Great Barrier Reef Marine Park.

Dr Townsend said local divers and snorkellers, some with 20 years of diving photos, would be involved in creating an image database to identify manta rays.

“We specifically want the pictures of the underbelly of the manta ray because this can be used to identify individuals,” she said.

“The black and white pattern is as unique as a fingerprint.”

She said much of the research work would start in October when the manta rays returned to Moreton Bay Marine Park.

“We are in a unique position of having over a decade's worth of data on Australian, African and Japanese manta ray populations which together with satellite imagery, will allow us to address many questions about the rays' biology,” Associate Professor Bennett said.

Project Manta will also address the broader issues of the effect of climate change on the marine environment.

“Understanding the manta ray's feeding activities, movements and migrations in relation to oceanic conditions will allow us to use this highly visible species as a biological indicator of ecosystem impacts resulting from climate change,” Dr Weeks said.

“Manta rays are a key drawcard for divers and naturalists and generally all of those that use Moreton Bay and the Great Barrier Reef Marine Park,” CRL Environment and Community Relations Manager Paul Smith said.

“By sponsoring research into this animal that lives right on our doorstep, we can assist not just manta rays, but the marine environment for future generations.”