This is a printer version of an UnderwaterTimes.com article.
To view the article online, visit: http://www.underwatertimes.com/news.php?article_id=69583010174 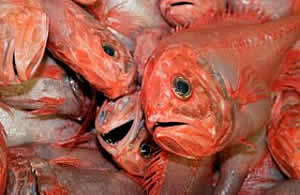 Scientists have said that nearly all deep-sea fisheries are unsustainable

BELLEVUE, Washington -- A team of leading marine scientists from around the world is recommending an end to most commercial fishing in the deep sea, the Earth's largest ecosystem. Instead, they recommend fishing in more productive waters nearer to consumers.

In a comprehensive analysis published online this week in the journal Marine Policy, marine ecologists, fisheries biologists, economists, mathematicians and international policy experts show that, with rare exceptions, deep-sea fisheries are unsustainable. The "Sustainability of deep-sea fisheries" study, funded mainly by the Lenfest Ocean Program, comes just before the UN decides whether to continue allowing deep-sea fishing in international waters, which the UN calls "high seas."

Life is mostly sparse in the oceans' cold depths, far from the sunlight that fuels photosynthesis. Food is scarce and life processes happen at a slower pace than near the sea surface. Some deep-sea fishes live more than a century; some deep-sea corals can live more than 4,000 years. When bottom trawlers rip life from the depths, animals adapted to life in deep-sea time can't repopulate on human time scales. Powerful fishing technologies are overwhelming them.

"The deep sea is the world's worst place to catch fish" says marine ecologist Dr. Elliott Norse, the study's lead author and President of the Marine Conservation Institute in Bellevue, Washington USA. "Deep-sea fishes are especially vulnerable because they can't repopulate quickly after being overfished."

The deep sea provides less than 1% of the world's seafood. But fishing there, especially bottom trawling, causes profound, lasting damage to fishes and life on the seafloor, such as deep-sea corals, these experts say.

Since the 1970s, when coastal fisheries were overexploited, commercial fishing fleets have moved further offshore and into deeper waters. Some now fish more than a mile deep.

"Because these fish grow slowly and live a long time, they can only sustain a very low rate of fishing," says author Dr. Selina Heppell, a marine fisheries ecologist at Oregon State University. "On the high seas, it is impossible to control or even monitor the amount of fishing that is occurring. The effects on local populations can be devastating."

The authors document the collapse of many deep-sea fishes around the world, including sharks and orange roughy. Other commercially caught deep-sea fishes include grenadiers (rattails) and blue ling.

"Fifty years ago no one ate orange roughy," said author Dr. Daniel Pauly, a fisheries biologist with the University of British Columbia (UBC). "In fact, it used to be called slimehead, indicating no one ever thought we would eat it. But as we've overfished our coastal species, that changed and so did the name."

Orange roughy take 30 years to reach sexual maturity and can live 125 years. Compared with most coastal fishes, they live in slow-motion. Unfortunately for them and the deep-sea corals they live among, they can no longer hide from industrial fishing.

"Fishing for orange roughy started in New Zealand and grew rapidly through the 1980s and 1990s. However, most of the fisheries were overexploited, and catch levels have either been dramatically reduced or the fisheries closed all together," says author Dr. Malcolm Clark, a New Zealand-based fisheries biologist. "The same pattern has been repeated in Australia, Namibia, the SW Indian Ocean, Chile and Ireland. It demonstrates how vulnerable deep-sea fish species can be to overfishing and potential stock collapse."

There are very few exceptions to unsustainable deep-sea fisheries around the world. One is the Azores fishery for black scabbardfish. There the Portuguese government has banned bottom trawling, which overfished black scabbardfish elsewhere. Azores fish are caught sustainably with hook and line gear from small boats. In most deep sea-fisheries, however, trawlers fish outside of nations' 200-mile Exclusive Economic Zones, outside of effective government control.

"Deep-sea fisheries can be sustainable only where the fish population grows quickly and fisheries are small-scale and use gear that don't destroy fish habitat," said Dr. Norse. "With slow-growing fish, there's economic incentive to kill them all and reinvest the money elsewhere to get a higher return-on-investment. Killing off life in the deep sea one place after another isn't good for our oceans or economies. Boom-and-bust fisheries are more like mining than fishing," Dr. Norse said.

The lawlessness of the high seas adds to overfishing in the deep. So do nations' fisheries subsidies.

High seas trawlers receive some $162 million each year in government handouts, which amounts to 25% the value of the fleet's catch, according to Dr. Rashid Sumaila, an author and fisheries economist at UBC.

The authors of this Marine Policy paper say that the best policy would be to end economically wasteful deep-sea fisheries, redirect subsidies to help displaced fishermen and rebuild fish populations in productive waters closer to ports and markets, places far more conducive to sustainable fisheries.