This is a printer version of an UnderwaterTimes.com article.
To view the article online, visit: http://www.underwatertimes.com/news.php?article_id=69235108704 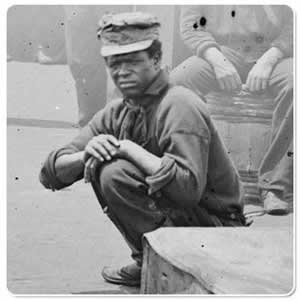 Siah Carter on the deck of the USS Monitor. Credit: The Mariners' Museum 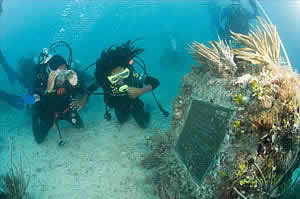 Aimed at everyone from students to adults, the Voyage to Discovery website offers feature stories, interviews, and videos about African-American seafaring achievements since the period of pre-Civil War to today. Information about marine careers will also be available.

The website is part of a broader NOAA initiative to build public awareness about the legacy of African-American maritime heritage and engage a broad spectrum of Americans in the stewardship of the country's coastal and ocean resources through education, archaeology, science and underwater exploration.

Daniel J. Basta, director, NOAA's Office of National Marine Sanctuaries, said the Voyage to Discovery education initiative honors African-Americans' deep connection to the sea and highlights the continuing, historic role of the ocean in the security, stability and prosperity of the nation.

"Our economy and way of life are inextricably linked to the health and productivity of the global ocean," Basta said. "Through this initiative, African-American youth can learn about their maritime heritage and the various educational and career opportunities that exist in the 21st century global economy."

Michael H. Cottman, a NABS member and author of "The Wreck of the Henrietta Marie," said he hopes Voyage to Discovery will inspire young adults to identify with their maritime roots and consider careers in marine science and oceanography.

"Minorities are the fastest growing population in the country, but are vastly underrepresented in science and technology fields," Cottman said. "In order for the U.S. to maintain its competitive edge, the future workforce will need to draw on the minds and talents of all its citizens."

As far back as the American Revolution, blacks have been involved in virtually every aspect of maritime work. Despite an uncertain and sometimes dangerous racial climate, blacks worked as skippers and captains as well as whalers, lobstermen and fishermen. They also managed lighthouses, steered paddleboats and warships, along with owning sea industry businesses. The Underground Railroad used ships to spirit slaves to freedom, and black mariners helped shaped the identity of free black communities.

Bill Murrain, founder of Murrain Associates, said the ocean and marine environment provides a wealth of services that are vital to communities nationwide.

"The rich, untold history that is chronicled throughout this project is a reminder that all of us have a responsibility to keep our ocean and waterways healthy so future generations will continue to reap the benefits," he said.

The National Association of Black Scuba Divers was established in 1991 to foster camaraderie among black divers and to address the unique problems and concerns of the African-American community. The organization has more than 2,000 members across the country and internationally. Membership is open to anyone regardless of race, color, gender, physical challenges or diving agency affiliation.