This is a printer version of an UnderwaterTimes.com article.
To view the article online, visit: http://www.underwatertimes.com/news.php?article_id=67102841035 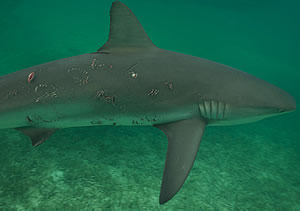 PENSACOLA, FL -- A research team has found that the low frequency, severe 'mating scars' on female sharks indicate the marks are not part of a regular mating effort, but may be the result of 'coercive mating', or rape.

In their new study, Dr. Erich Ritter, a shark-human interaction specialist, and statistician Dr. Raid Amin, both of the University of West Florida, describe coercive mating among sharks, where a male makes forceful attempts to mate with an unwilling female. While coercive mating has been documented in many animal groups, it has not been formally described in sharks, rays or chimaeras--until now.

The study noted that during mating in most shark species, the male uses its jaws to grab the female in or around the gill or pectoral fin area to hold on during copulation. It's during the act of grabbing with the jaws the females can get injured and scarred. Most of the time the scars are superficial, but sometimes the scars can be severe, resulting in permanent body damage.

It's here the authors say from an evolutionary standpoint, there's no advantage for the male shark to severely injure the female whose survival might be jeopardized. Given the low frequency of sharks bearing such scars indicates that those markers are not part of regular mating efforts, but something different. The authors say the female sharks are severely injured while spurning unwanted or undesired mating attempts, or rape, by male sharks.

Dr. Ritter describes the significance of the scars. "Since these scars are the exception to the rule, most of the time male sharks grasp females carefully. Although we had to highlight that rape exists in sharks, it overall tells the story that sharks are normally not as brutal when reproducing as previously thought."