This is a printer version of an UnderwaterTimes.com article.
To view the article online, visit: http://www.underwatertimes.com/news.php?article_id=65921008374 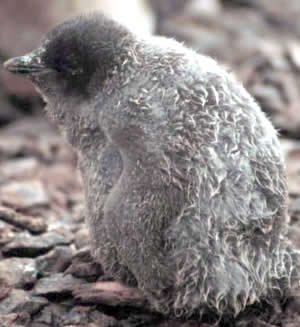 Rain has soaked this AdÃ©lie penguin chick in Antarctica before its feathers are capable of repelling water. Credit: Dee Boersma

SEATTLE, Washington -- Like the proverbial canary in the coal mine, penguins are sounding the alarm for potentially catastrophic changes in the world's oceans, and the culprit isn't only climate change, says a University of Washington conservation biologist.

Oil pollution, depletion of fisheries and rampant coastline development that threatens breeding habitat for many penguin species, along with Earth's warming climate, are leading to rapid population declines among penguins, said Dee Boersma, a University of Washington biology professor and an authority on the flightless birds.

"Penguins are among those species that show us that we are making fundamental changes to our world," she said. "The fate of all species is to go extinct, but there are some species that go extinct before their time and we are facing that possibility with some penguins."

In a new paper published in the July-August edition of the journal BioScience, Boersma notes that there are 16 to 19 penguin species, and most penguins are at 43 geographical sites, virtually all in the Southern Hemisphere. But for most of these colonies, so little is known that even their population trends are a mystery. The result is that few people realized that many of them were experiencing sharp population declines.

Boersma contends the birds actually serve as sentinels for radically changing environment. She advocates a broad international effort to check on the largest colonies of each penguin species regularly– at least every five years – to see how their populations are faring, what the greatest threats seem to be and what the changes mean for the health of the oceans.

"We have to be able to understand the world that we live in and depend on," she said. "It is the responsibility of governments to gather the information that helps us understand and make it available, but if they can't do it then we need non-governmental organizations to step up."

For 25 years, working with the Wildlife Conservation Society and UW colleagues, Boersma has studied the world's largest breeding colony of Magellanic penguins at Punta Tombo on the Atlantic coast of Argentina. That population probably peaked at about 400,000 pairs between the late 1960s and early 1980s, and today is just half that total.

There are similar stories from other regions. African penguins decreased from 1.5 million pairs a century ago to just 63,000 pairs by 2005. The number of Galapagos Islands penguins, the only species with a range that extends into the Northern Hemisphere, has fallen to around 2,500 birds, about one-quarter what it was when Boersma first studied the population in the 1970s.

The number of AdÃ©lie and Chinstrap penguins living on the Antarctic Peninsula, the northernmost part of the continent, has declined by 50 percent since the mid-1970s. Other species in Africa, South America, Australia, New Zealand, the Falklands Islands and Antarctica also have suffered significant population declines, Boersma said.

She recounts watching in 2006 as climate anomalies wreaked havoc on breeding of the same population of Emperor penguins that was featured in the popular 2005 film "March of the Penguins." The colony bred in the same location as in other years, where the ice is protected from the open sea and wind keeps snow from piling up and freezing the eggs. But in September, with the chicks just more than half-grown, the adults apparently sensed danger and uncharacteristically marched the colony more than 3 miles to different ice. The ice they chose remained intact the longest, but in late September a strong storm broke up the remaining ice and the penguin chicks were forced into the water. While the adults could survive, the chicks needed two more months of feather growth and buildup of insulating fat to be independent. The likely result of the climate anomaly, Boersma said, was a total colonywide breeding failure that year.

Changing climate also appears to be key in the decline of Galapagos penguins, she said. As the atmosphere and ocean get warmer, El NiÃ±o Southern Oscillation events, which affect weather patterns worldwide, seem to occur with greater frequency. During those times, ocean currents that carry the small fish that the penguins feed on are pushed farther away from the islands and the birds often starve or are left too weak to breed.

These problems raise the question of whether humans are making it too difficult for other species to coexist, Boersma said. Penguins in places like Argentina, the Falklands and Africa run increasing risks of being fouled by oil, either from ocean drilling or because of petroleum discharge from passing ships. The birds' chances of getting oiled are also increasing because in many cases they have to forage much farther than before to find the prey on which they feed.

"As the fish humans have traditionally eaten get more and more scarce, we are fishing down the food chain and now we are beginning to compete more directly with smaller organisms for the food they depend on," she said.

As the world's population continues to explode and more and more people live in coastal areas, the negative effects are growing for both marine and shore-based habitats used by a variety of species. There is an urgent need to begin monitoring those negative impacts, Boersma said.

"The Discovery Channel and public television are very popular for their nature programs, and those featuring penguins are especially popular. But we don't want to just have them in our television sets. We want to have them out in the world."