This is a printer version of an UnderwaterTimes.com article.
To view the article online, visit: http://www.underwatertimes.com/news.php?article_id=65720109384 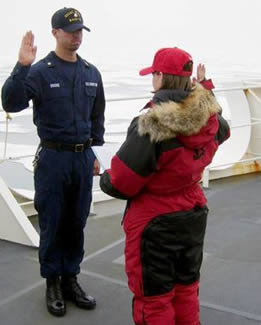 Others milled about in the pleasantly cold, brilliant summer day, stretching their legs after a month aboard a rocking, bucking, 420-foot icebreaker.

Lt. Jessica Hill and Boatswain's Mate Steven Duque seized the chance to fit in a training dive and slipped into a patch of open water near the Healy's bow. A support team held ropes attached to the divers, lest they become disoriented under the ice. Several research scientists watched from the deck, waiting for them to resurface.

More than a month later, what happened on the other end of those ropes remains unclear — except that both divers died.

The Coast Guard has started two investigations, relieved the Healy's captain, pulled all diving equipment off the ship for examination, and suspended all polar diving. Nothing has been said about what might have killed Hill, 31, and Duque, 22, on Aug. 17, or when the investigations will conclude.

"We can get no word whatsoever, and that's tough," Hill's father, William Hill Jr., said. "We can't even get the death certificates."

The Healy, commissioned in 1999 and capable of sailing through ice up to 8 feet thick, was in the Arctic as part of a research mission backed by the National Science Foundation. On board were three dozen scientists, led by a group from the University of Texas at Austin, collecting data that would help them map the ocean floor and study the Earth's crust in hopes of gaining a better understanding of earthquakes, tsunamis and plate tectonics.

Hill, the ship's marine science officer and a native of St. Augustine, Fla., was an experienced civilian diver before she joined the Coast Guard about four years ago. Her shipmates described her as a fun-loving officer who enjoyed working with the researchers onboard. During the Healy's trip to the North Pole last year, she posed on the ice in a bikini by a red-and-white-striped pole brought for the occasion.

Duque, whose responsibilities included keeping the Healy's decks in order, operating machinery and driving launch boats, was from Miami. His colleagues said he was exceedingly professional and inspired others to take their jobs seriously.

They had been under water for about 10 minutes, estimated Harm Van Avendonk, a University of Texas geophysics researcher. It was near the end of the two-hour break, and many people had returned to the ship.

"I saw people from the bow looking intently down on the ice, and I sensed immediately that they didn't look relaxed," he said. "It was taking a long time for the divers to reappear."

Steve Stevenoski, a high school teacher from Wisconsin Rapids, Wis., remained on the ice and was videotaping the expansive frozen seascape when he heard shouts from the dive support team, calling for extra hands to man the ropes. He dropped his camera and tried to help.

In a blur, the crew's training took over, several witnesses said.

The divers were pulled up by the ropes. Blankets and stretchers were rushed onto the ice, and EMTs immediately began performing CPR in an attempt to revive them. Soon they were carried to the sick bay onboard, where they were pronounced dead at 8 p.m., roughly two hours after the accident.

"What I can tell you is this: These people were very well trained. Every time we did something we had to have a safety briefing," Stevenoski said. "There was an accident that was completely unforeseen. What's unusual is we don't know why they died."

Van Avendonk stressed that while about 50 others were playing football on the ice, taking panoramic photos and going for walks, "the people involved in the dive were entirely focused on the dive."

According to Coast Guard protocol, they would have created a "dive profile," detailing who was diving, how far down they were going and how long they would spend at various depths.

Typically such plans are drawn up by a ship's dive officer, though the captain is ultimately responsible for the safety of divers. That could explain why Capt. Douglas Russell, who transferred from a desk job in Washington, D.C., to the Healy in June, was relieved of command less than two weeks after the accident. Vice Adm. Charles D. Wurster, commander of the Coast Guard in the Pacific, said he had lost confidence in Russell.

Before he was relieved, Russell wrote on the ship's Web site that Arctic operations would continue following a four-day stop in Kodiak, Alaska. Instead, the Healy returned to its home port of Seattle under Russell's predecessor, Capt. Daniel K. Oliver.

The only signs of the tragedy during a recent tour of the ship were a grief counseling pamphlet on a table in the scientists' lounge and the locked and empty room where dive equipment was stored. The equipment was shipped to the Navy's dive school in Panama City, Fla., for examination. One investigation is focusing on the root cause in hopes of preventing future accidents; the other is a broader administrative investigation that could result in findings of responsibility.

One investigator, a lieutenant, said Hill and Duque were the first Coast Guard divers to die under water since the 1970s.

The Coast Guard described the dive as routine, but any dive in frigid waters beneath 4-feet-thick ice poses serious dangers. The cold can numb the extremities. Divers typically wear dry suits, which use air to help determine buoyancy. Such suits can balloon during ascents as pressure decreases — if the diver doesn't release the air quickly enough, he or she can shoot toward the surface and crash into the ice.

They also must use equipment that can handle the cold water, such as breathing regulators outfitted with rubberized covers filled with antifreeze.

Hill and Duque had both attended the Navy's dive school, which is required of all Coast Guard divers. William Hill said his daughter resolved to attend the school shortly after joining the Coast Guard, when her crew investigated a sunken German ship that was leaking oil off California.

"She had to stand on the deck while everyone else was going down," he said. "That's when she decided to become a Coast Guard diver. She was only 5-foot-5, and her little short legs had to work like mad to compete with the guys, but she thought she could do anything they could do."

The deaths hit the Healy's crew of 75 hard, said Ensign Stephen Elliott, who was on the ice as part of the dive support team that day. He said he couldn't discuss anything that might be covered by the investigation.

"I know everyone on board," he said. "These are people you watch movies with, eat with, joke around with. It's hard to explain to someone who doesn't live on a ship what it's like to be a shipmate. They were incredible shipmates."