This is a printer version of an UnderwaterTimes.com article.
To view the article online, visit: http://www.underwatertimes.com/news.php?article_id=65714201083 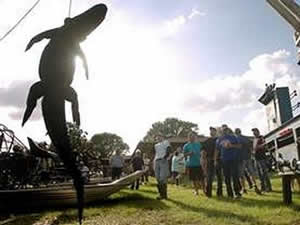 MELBOURNE, Florida -- A team of men battled a nearly 13-foot, 640-pound "monster dinosaur" alligator for three hours before killing it.

Les Woodring, 44, has been hunting alligators for about 10 years but said he had never encountered anything rivaling the one he and four others fought and subdued on the St. Johns River about three miles north of Melbourne's Lake Washington.

"We seen it crossing the river and got some snag hooks in it and then we got some friends to come over and help us out, it took five of us get it out," Woodring told Local 6 News partner Florida Today.

The group first encountered the gator at about 7:45 p.m. Tuesday and fought it for three hours before killing it with a body shot with a crossbow. It took about 90 minutes for it to be secured onto an airboat.

Woodring plans to have a full-body mount of the gator.

There is no real way to tell the age of the alligator, said Harry Dutton, the Florida Fish and Wildlife Conservation alligator management program coordinator.

"It's not unheard of in the wild for alligators to live up to 35 to 50 years," Dutton said.

Forest Palmer, of Melbourne, bagged a gator of similar size on Lake Washington Aug. 30 and fired the kill shot into the lungs of Woodring's gator with a crossbow.

"It was definitely a team effort between me and Lester," Palmer said. "It's a dinosaur, I've never seen anything like it. His head probably weighs about 100 to 150 pounds."

Also present were Robert Rohman, Christian Emig and Capt. Peter Deeks, all of Satellite Beach, who were hunting about a mile away and were called in to assist.