This is a printer version of an UnderwaterTimes.com article.
To view the article online, visit: http://www.underwatertimes.com/news.php?article_id=65392410807 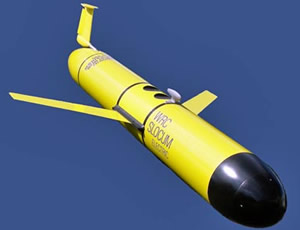 The Slocum glider is an autonomous underwater vehicle (AUV) that is driven by a variable buoyancy system as opposed to a traditional propeller.

SARASOTA, Florida -- On Monday, Mote Marine Laboratory scientists working in partnership with Rutgers University launched an underwater robot offshore of Southwest Florida to patrol the Gulf of Mexico for oil.

The robot, called an autonomous underwater vehicle, or AUV, looks like a yellow torpedo and is equipped with a payload that can detect oil and the chemicals used to disperse it in the water. Launched from a boat 20 miles west of Venice, the AUV will travel another 80 to 100 miles west-southwest, patrolling the Continental Shelf perpendicular to the coastline.

Thanks to a grant from the Gulf Coast Community Foundation of Venice, Mote also has funding to launch another two gliders off Florida later this week. The first â nicknamed Nemo and owned by Mote â will look for oil about 15 miles offshore between Tampa Bay and Charlotte Harbor. The second â nicknamed Waldo and owned by the National Oceanic and Atmospheric Administration â is scheduled to be deployed to the Florida Keys, where it will search for oil in the Straits of Florida â the location oil might appear if it gets carried south by the Loop Current.

Short of sending researchers out in boats to physically take water samples, this is the only way to tell what's happening under the water's surface, said Dr. Gary Kirkpatrick, manager of Mote's Phytoplankton Ecology Program who is heading up these glider missions.

"There are really large issues at stake for us here in Florida," Kirkpatrick said. "It's not really logistically possible to have humans in boats covering these wide areas, constantly looking for signs of the oil spill coming toward our shores. But we have these great robots that can do this 24 hours a day for three weeks in a row, so it's important we use these tools." If the AUVs encounter oil, Mote can alert resource managers so they can act to protect important ecological resources and shorelines, Kirkpatrick said. This is believed to be the first time that an AUV has been equipped a payload that can detect oil and sent on a patrol mission.

In addition to supporting the glider missions, the funding from the Gulf Coast Community Foundation of Venice will help Mote researchers:

"We can't thank the Gulf Coast Community Foundation of Venice enough for this lead gift," said Dr. Kumar Mahadevan, president of Mote Marine Laboratory and Aquarium. "The impact from this spill is going to be tremendous and as the response progresses, the need for funding to understand the impact is going to be great. This grant will help cover the costs associated with doing some initial planning and fact-finding but the scope of work to determine the effects of the spill on our region's environment is quite enormous."