This is a printer version of an UnderwaterTimes.com article.
To view the article online, visit: http://www.underwatertimes.com/news.php?article_id=65107801932 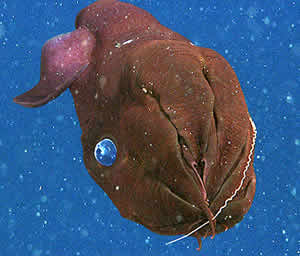 This close up view shows a vampire squid using its arms to scrape food off of one of its filaments. Image: Â© 2008 MBARI

MONTEREY, California -- About 100 years ago, marine biologists hauled the first vampire squid up from the depths of the sea. Since that time, perhaps a dozen scientific papers have been published on this mysterious animal, but no one has been able to figure out exactly what it eats. A new paper by MBARI Postdoctoral Fellow Henk-Jan Hoving and Senior Scientist Bruce Robison shows for the first time that, unlike its relatives the octopuses and squids, which eat live prey, the vampire squid uses two thread-like filaments to capture bits of organic debris that sink down from the ocean surface into the deep sea.

It's easy to imagine the vampire squid as a nightmarish predator. It lurks in the eternal midnight of the deep sea, has a dark red body, huge blue eyes, and a cloak-like web that stretches between its eight arms. When threatened, it turns inside out, exposing rows of wicked-looking "cirri." Even its scientific name, Vampyroteuthis infernalis, means "vampire squid from hell."

In reality, the vampire squid is a soft-bodied, passive creature, about the size, shape, and color of a football. A "living fossil," it inhabits the deep waters of all the world's ocean basins at depths where there is almost no oxygen, but also relatively few predators.

A few previous researchers have caught vampire squids in nets, hauled them up to the surface, and tried to figure out what they ate by examining the contents of their stomachs. The results were generally inconclusive. The stomachs typically contained bits and pieces of tiny, shrimp-like animals, microscopic algae, and lots of slimy goo.

In a recent article in the Proceedings of the Royal Society B: Biological Sciences, Hoving and Robison show that vampire squids eat mostly "marine snow"âa mixture of dead bodies, poop, and snot. The dead bodies are the remains of microscopic algae and animals that live in the waters farther up in the ocean, but sink down into the depths after they die. The poop consists of fecal pellets from small, shrimp-like animals such as copepods or krill. The snot is mostly debris from gelatinous animals called larvaceans, which filter and consume marine snow using mucus nets.

In addition to looking at the stomach-contents of vampire squids from museum collections, the researchers used MBARI's remotely operated vehicles (ROVs) to collect live vampire squids and study their feeding habits in the laboratory. They also examined high-definition videos of vampire squids taken by MBARI's ROVs. Finally, they examined vampire-squid arms and feeding filaments under optical and scanning electron microscopes.

One key to Hoving and Robison's discovery was that they used MBARI's ROVs to collect living vampire squids, and were able to keep them alive in the laboratory for months at a time. Hoving soon found that if he placed bits and pieces of microscopic animals into a tank with a vampire squid, the food particles would stick to one of the string-like filaments that the animal sometimes extends outward from its body. The vampire squid would then draw the filament through its arms, removing the particles from the filament and enveloping them in mucus. Finally, the squid would transfer the glob of mucus and particles to its mouth and consume it.

Using MBARI's video annotation and reference system (VARS), Hoving also identified every MBARI ROV dive over the last 25 years during which researchers had seen a vampire squid. He then pored over 170 of these video clips (over 23 hours of footage) to look for additional clues as to what and how the animals ate.

The videos showed that vampire squids often drift motionless in the water, extending one of their thin filamentsâup to eight times as long as the animal's bodyâlike a fishing line. In many cases, Hoving saw bits of marine snow sticking to the filament. He also saw vampire squids slowly pulling in their filaments and scraping off the accumulated marine snow using their arms. Other vampire squids had globs of marine snow and mucus dangling from their mouths.

Under the microscope, the researchers observed that the vampire squid's suckers were covered with cells that produce mucus, which the animal apparently uses to collect and glue together individual particles of marine snow. Their filaments are covered with tiny hairs and a dense net of sensory nerves, which makes them extremely sensitive to touch.

When looking at vampire squids' stomach contents, the researchers did not see bones or pieces of individual animals that would indicate the vampire squids had captured live prey. Instead, they saw mostly amorphous bits of broken-up organic debris. The only prey they saw that might have been eaten alive were the remains of tiny crustaceans that sometimes "hitchhike" on sinking mucus nets or clumps of the marine snow.

After considering all the evidence, Hoving and Robison conclude that, "the vampire squid's filament is likely a multifunctional organ that is deployed to detect and capture detrital matter but at the same time may detect the presence of predators and perhaps small living prey."

The organic detritus that forms the bulk of the vampire squid's diet would not seem to be particularly nutritious. However vampire squids complement their frugal diet with an extremely energy-efficient lifestyle and unique adaptations. Their bodies are neutrally buoyant, so they don't have to expend energy to stay at a particular depth. Even better, they don't have to swim to find food, but simply extend their filaments to collect food that drifts past them.

Finally, vampire squids don't have to expend much energy avoiding predators, because they live at depths where there is so little oxygen that few other animals can survive. Conveniently, these deep, low-oxygen zones are often found where there is an abundance of life near the sea surface, which in turn creates lots of marine snow for vampire squids to eat. Hoving explains, "Because of its unique adaptations, the vampire squid is able to permanently and successfully inhabit the center of the oxygen minimum zone, an otherwise hostile environment where the vampire squid's predators are few, and its food is abundant."

Even though Hoving and Robison's research shows that the vampire squid is a "detritivore" rather than an active predator, its sinister appearance and stealthy habits will no doubt continue to fascinate both researchers and the general public.