This is a printer version of an UnderwaterTimes.com article.
To view the article online, visit: http://www.underwatertimes.com/news.php?article_id=64582100179 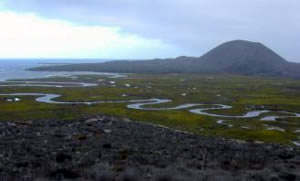 SANTA BARBARA, California -- In a study of free-living and parasitic species in three estuaries on the Pacific coast of California and Baja California, a team of researchers from the University of California, Santa Barbara, the United States Geological Survey, and Princeton University has determined that parasite biomass in those habitats exceeds that of top predators, in some cases by a factor of 20. Their findings, which could have significant biomedical and ecological implications, appear in the July 24 issue of the science journal Nature.

According to Armand Kuris, a professor of zoology in UCSB's Department of Ecology, Evolution, and Marine Biology and a lead author of the paper, the study's findings have a potential impact on the perceived role of parasites in an ecosystem. From an ecological perspective, parasites serve both as regulators to prevent species from becoming numerically dominant and as indicators of the health of a particular ecosystem. The study shows for the first time that parasites might drive the flow of energy in ecosystems.

"The total amount of energy flow in ecosystems due to infectious processes must be enormous - even greater than we'd expect given the large parasite biomass," Kuris said. "I expect the amount of energy going into host tissue repair and replenishment is also huge. An implication of our study is that we should pay more attention to the energetics of disease."

Biomass is the amount of living matter that exists in a given habitat. It is expressed either as the weight of organisms per unit area or as the volume of organisms per unit volume of habitat. Until now, scientists have believed that because parasites are microscopic in size they comprise a small fraction of biomass in a habitat while free-living organisms such as fish, birds, and other predators comprise the vast majority.

The researchers quantified the biomass of free-living and parasitic species in the three estuaries and demonstrated that parasites have substantial biomass in these ecosystems. "Parasites have as much, or even more, biomass than other important groups of animals - like birds, fishes, and crabs," said Ryan Hechinger, a researcher at UCSB's Marine Science Institute and co-lead author of the paper.

The article grew out of a five-year study supported by a $2.2 million grant from the National Science Foundation and the National Institutes of Health through the agencies' joint Ecology of Infectious Diseases Program. In addition to Kuris, principal investigators include Kevin Lafferty, a marine ecologist with the United States Geological Survey; and Andrew Dobson, a professor of ecology and evolutionary biology at Princeton University. Other important collaborators included Leopoldina Aguirre-Macedo, of the Centro de InvestigaciÃ³n y Estudios Avanzados Unidad MÃ©rida, and Mark Torchin, a staff scientist with the Smithsonian Tropical Research Institute.

"The reason we wanted to complete this study is because a lot of work we've done has suggested that parasites are important in ecosystems. But no one's actually looked at them as a group throughout an ecosystem," said Lafferty. "Also, no one's considered parasites from the perspective of how much they weigh because it's always been assumed they weigh almost nothing. Now we know that's not true.

"For example, in an estuary there are more kilograms of trematode worms - parasites - than kilograms of birds," he noted. "If you could see the trematodes with binoculars, you might not bother bird watching."

Said Hechinger: "No one debates whether it's important for ensuring human welfare to understand how ecosystems work. How can we possibly understand something without accounting for its major parts? Because our findings indicate that parasites control a massive amount of biomass, it would seem future research can't ignore them."

According to Kuris, understanding the enormity of parasite biomass and the burden it places on available hosts could lead to new strategies in the management of infectious diseases. Treatment protocols might put greater emphasis on enhancing the host's ability to defend itself against parasitic disease and slow the rate of energy uptake by the parasites and pathogens.