This is a printer version of an UnderwaterTimes.com article.
To view the article online, visit: http://www.underwatertimes.com/news.php?article_id=63901054127 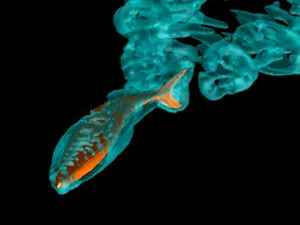 a computer simulation of a mackerel showed that its swimming style is perfectly adapted to the environment it inhabits. credit UofM

MINNEAPOLIS, Minnesota -- Researchers from the University of Minnesota's Institute of Technology have found that the hydrodynamic environment of fish can shape their physical form and swimming style. The research, available on the Journal of Experimental Biology Web site, was sponsored by the National Science Foundationâs National Center for Earth-surface Dynamics.

Catch a glimpse of a fish's body shape, and you can often guess how speedy it is. Tuna and mackerel look as if they should outpace frilly reef fish and eels. But how have all of these diverse body shapes evolved? Have fish bodies been shaped by the hydrodynamics of their environment or did they evolve for other reasons?

Turning to computational fish for answers, professor of Civil Engineering Fotis Sotiropoulos, along with postdoctoral researcher Iman Borazjani, from the universityâs St. Anthony Falls Laboratory decided to race hybrid and realistic fish in a massive parallel computer cluster to find out what influence the aquatic environment has had on fish shapes and swimming techniques.

But building the computational fish was far from straightforward. âWe started this work over five years ago,â says Sotiropoulos. "It was a challenge because we had never simulated anything living before."

Borazjani explains that the hydrodynamic forces exerted on swimmers vary enormously depending on their size and speed. Knowing that mackerel and eels swimming in water generate and thus experience different hydrodynamic environments, the duo simulated these different environments by varying tail beat frequencies and fluid viscosity (syrupiness).

âFrom these experiments, we can deduce that real mackerel and eel's swimming styles are perfectly adapted to the hydrodynamic environments that they inhabit," says Sotiropoulos. The method could be adapted to study how a fluid environment molds the evolution of other organisms and to design robots that would swim at different speeds or in water of different viscosities, the researchers say.

The full article can be found on the Journal of Experimental Biology Web site.