This is a printer version of an UnderwaterTimes.com article.
To view the article online, visit: http://www.underwatertimes.com/news.php?article_id=62105930178 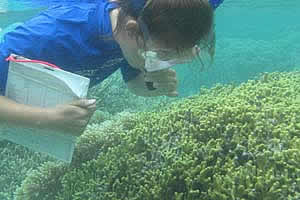 An American University graduate student contributing to Kimâs research examines coral off the coast of Guam.

WASHINGTON, D.C. -- Nitrogen pollution in our coastal ecosystems, the result of widespread use of synthetic agricultural fertilizers and of human sewage, leads to decreased water transparency, the loss of desirable fish species, and the emergence of toxic phytoplankton speciesâsuch as the algae behind the renowned "red tides" that kill fish. The effects are particularly pronounced in the Gulf of Mexico and the Caribbean.

A study published in the journal Global Change Biology finds that while fertilizer has been the dominant source of nitrogen pollution in Caribbean coastal ecosystems for the past 50 years, such pollution is on the decline, thanks in part to the introduction of more advanced, environmentally responsible agricultural practices during the last decade. But now, sewage-derived nitrogen is increasingly becoming the top source of such pollution in those areas.

"We can't simply say our coastal ecosystem is being polluted by nitrogen," said Kiho Kim, one of the study's authors and chair of environmental science at American University. "The consequences may be the same, but differentiating the source of the pollutants is critical to crafting sustainable solutionsâyou can't fix a problem if you don't know what's causing it."

Through a chemical analysis of 300 coral samples from the Smithsonian Institution's National Museum of Natural History's Invertebrate Zoology Collection, Kim and some American University graduate students reconstructed a record of nitrogen inputs into the Caribbean over the last 150 years. Agricultural and sewage pollution create different signatures in organisms like coral.

"We determined that poor storm water management and waste water treatment were really to blame over the last decade for nitrogen pollution in the Caribbean," said Kim. "Our next step is to document this process in action."

To do this, Kim will focus on coral samples from the coastal areas of Guam, a small Pacific island that during the next four years will experience a population increase of 20 percent as the U.S. military relocates Marines from Okinawa, Japan to Guam.

Guam already has poor waste water infrastructure, and the influx of military personnel will further strain the island's resources. For Kim, the transition presents a unique opportunity to observe and document, in real time, the impact of increased sewage-derived nitrogen on the health of the coral reefs. He has already collected some baseline data in Guam, thanks to a small grant from the National Oceanic and Atmospheric Administration.

The Marines' translocation has recently slowed a bit, partially because of the earthquake and tsunami in Japan.

"This means that we will have time to collect more comprehensive baseline data," said Kim, who will return to Guam this summer to perform another set of sample and data collections with his colleague at the University of Guam.

American University is a leader in global education, enrolling a diverse student body from throughout the United States and nearly 140 countries. Located in Washington, D.C., the university provides opportunities for academic excellence, public service, and internships in the nation's capital and around the world.