This is a printer version of an UnderwaterTimes.com article.
To view the article online, visit: http://www.underwatertimes.com/news.php?article_id=61078410529 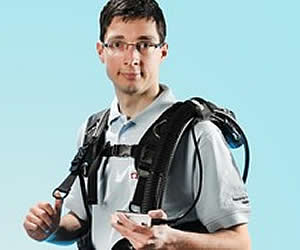 LAUSANNE, Switzerland -- The Suba system aims to become to diving what the automatic pilot is to flying. Developed by a student from EPFL, it will be released to the market by his start-up company: Pandora Underwater Equipment, starting from April 2012.

When a diver loses control, it's time for Suba to take over. This system connects the diver's stabilizer jacket to an 'intelligent' wristband. Thus, the jacket inflation/deflation system controlling the underwater explorer's buoyancy works automatically in the case of a problem. This ingenious device was developed by David Bonzon, micro technology student at EPFL, and will be released for sale from the month of April.

About 450 diving accidents are annually recorded in France, of which three quarters are due to decompression blunders, according to a survey carried out by the medical and national prevention commission of the FÃ©dÃ©ration FranÃ§aise d'Etude et des Sports Sous-Marins. This results in an average accident rate of one per 755 divers. At first, the distribution of this novel equipment will be targeting diving schools so that instructors can monitor and reassure beginners. "If someone panics, she or he is not capable of deciding whether to inject air into or to expel it out of the jacket, which is the moment when the device detects the irregularity and automatically takes care of managing the diver's decompression stops," David explains. It also allows to pre-set parameters such as the duration or depth level of diving.

David, just enrolled at EPFL, developed the system connecting the jacket to the device with his cousin Guillaume Raudel, automation engineer. It consists of an electromechanical system integrating solenoid valves and a control board. They have just applied for a patent.

Christophe Glez, professional diver and current COO of the start-up company, was the one to realize the necessity of finding a solution to the disorientation a diver can experience during ascent. After various tests in the family garage and later in the lake, Suba was born. Certain of the interest their device was to arouse in the market, these youngsters started to request financial aid from foundations supporting young companies. They finally obtained contributions from Venture Kick in 2011.

Further to taking Venture Lab courses and to exchanging discussions with established professionals like Christopher Webb, now CEO of the young enterprise, they have grown to be respected entrepreneurs. David is currently completing his master's degree in the United States and intends to invest himself in the start-up on a full time basis upon his return. The young company's office is based in the "Garage", famous incubator of EPFL businesses, and it currently employs four people, of whom two work full time.