This is a printer version of an UnderwaterTimes.com article.
To view the article online, visit: http://www.underwatertimes.com/news.php?article_id=61039528710 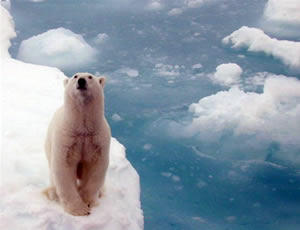 WASHINGTON, D.C. -- A new study by NOAA scientists shows that areal sea-ice coverage of the Arctic Ocean will decline by more than 40 percent before the summer of 2050, compared to a 1979-1999 base period.

The work was done by James Overland, an oceanographer at NOAA’s Pacific Marine Environmental Laboratory in Seattle, and Muyin Wang, a meteorologist at NOAA’s Joint Institute for the Study of the Atmosphere and Ocean at the University of Washington in Seattle. It will be published Sept. 8 in Geophysical Research Letters, a publication of the American Geophysical Union.

These findings are based upon a study of national and international computer models that closely match the observed sea-ice extent over the 20-year baseline period of 1979-1999, and then project forward in time to determine any changes.

“We wanted to assess how much confidence we can have in regional projections of sea ice from the 20 computer models used in the Intergovernmental Panel on Climate Change (IPCC) Fourth Assessment Report,” said Overland. “Our purpose was to first ensure that our models could replicate observations of the baseline conditions during the 1979-1999 period before considering 21st century projections. Our results present a consistent picture: there is a substantial loss of sea ice for most models by 2050.”

Projections in the IPCC report show summer sea ice loss throughout the Arctic Ocean north of Alaska, Canada and Asia. Sea ice loss is also seen during winter in the seasonal ice zones of the more southern Bering and Barent seas, and the Sea of Okhotsk. The models show no ice loss in the Baffin Bay region, west of Greenland.

“These seasonal ice zones have large variability on annual and decadal time scales,” said Wang. ”Projections of sea ice are important as there will be impacts on humans and other ecosystem components.”

The authors note that loss of ice has major impacts on marine ecosystems, transportation, and feedbacks to the larger climate system. For example, the light-colored ice reflects the sun’s warming rays; the dark water absorbs that heat. Less ice to reflect the heat means more water to absorb the warmth.