This is a printer version of an UnderwaterTimes.com article.
To view the article online, visit: http://www.underwatertimes.com/news.php?article_id=60710418239 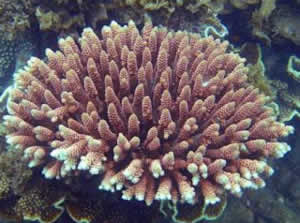 This is an adult Acropora millepora coral on the Great Barrier Reef off the coast of Australia. Credit: Misha Matz, UT Austin

AUSTIN, Texas -- A nearly complete collection of genes for a species of reef-building coral has been assembled by a team led by biologists from The University of Texas at Austin.

The scientists will use the genetic data to understand natural variations in corals from around the world and how they respond, at the genetic level, to rising water temperatures.

"One of the most important questions for coral biologists is whether it will be possible for corals to adapt to the warming oceans," says Eli Meyer, postdoctoral researcher in the Section of Integrative Biology. "Answering that question requires a detailed knowledge of the genes that corals use to respond to stress."

Meyer and Mikhail Matz, assistant professor of integrative biology, developed an improved method for sequencing all of the genes being used by an organism, known as the "transcriptome." Those genes, plus other non-expressed genes and DNA, together equal the organism's entire genome.

Meyer and Matz published their findings in the journal BMC Genomics, but the gene sequences and markers were made public online directly following their availability.

Researchers from around the world have already begun to use the data. They are studying diverse aspects of coral biology such as response to stress, synchronization of mass spawning and relatedness of coral populations across the Pacific.

"I think this will facilitate an explosion in the science of coral adaptation and evolution," says Matz. "We developed a big boot to kick down a door leading to coral genomics."

Matz and Meyer say their method can be used to study the genes of any other organism that isn't yet common to genomic research.

"In about one month's time, you can now have almost a complete catalog of any organism's genes," says Matz.