This is a printer version of an UnderwaterTimes.com article.
To view the article online, visit: http://www.underwatertimes.com/news.php?article_id=60510198473 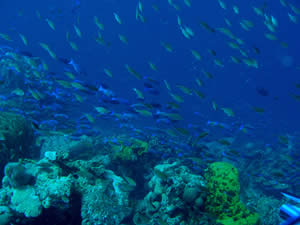 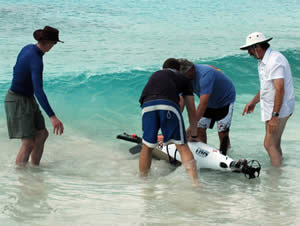 AUV launch off the beach on Bonaire. credit NOAA

WASHINGTON, D.C. -- A NOAA-sponsored expedition is investigating shallow and deep coral ecosystems off the Caribbean island of Bonaire, part of the Netherland Antilles. Multiple underwater robots and divers are surveying arguably the most pristine coral reefs in the Caribbean to learn why they remain relatively healthy while many in the Caribbean and around the world are threatened. The mission is one of the first in the International Year of the Reef 2008.

“The International Year of the Reef is a year-long, worldwide campaign to highlight the importance of coral reef ecosystems, and to motivate people to protect them,” said Vice Admiral Conrad C. Lautenbacher, Jr., under secretary of commerce for oceans and atmosphere and NOAA administrator. “NOAA supports this campaign with leadership and coordination, and by sponsoring scientific study of reef systems such as those off Bonaire.”

The expedition runs through January 30 and is chronicled online.

In shallower waters, the team is measuring changes from limited surveys in the 80’s and 90’s. In deeper waters, three robots called Autonomous Underwater Vehicles, will survey the “Twilight Zone,” 65 to 150 meters deep, where sunlight is scarce and little is known about reef systems.

“We believe this is the first science expedition using multiple AUVs to chart Bonaire’s reefs and likely the first to do so on coral reefs anywhere,” said expedition leader Dr. Mark Patterson of the Virginia Institute of Marine Science, College of William & Mary. “This is important because of scale, AUVs obtain wide-area data, allowing scientists to pinpoint further investigation.”

Scientists from The College of William & Mary, the University of Delaware, and Scripps Institution of Oceanography at the University of California-San Diego share science leadership, while NOAA provides personnel support and funding. NOAA’s Undersea Research Center at the University of North Carolina Wilmington provides diving expertise and equipment. Using compressed air or trimix, (helium, nitrogen and oxygen), divers go to 100 meters deep to selectively verify AUV mapping. The National Oceanic and Atmospheric Administration, an agency of the U.S. Commerce Department, is dedicated to enhancing economic security and national safety through the prediction and research of weather and climate-related events and information service delivery for transportation, and by providing environmental stewardship of our nation's coastal and marine resources. Through the emerging Global Earth Observation System of Systems (GEOSS), NOAA is working with its federal partners, more than 70 countries and the European Commission to develop a global monitoring network that is as integrated as the planet it observes, predicts and protects.