This is a printer version of an UnderwaterTimes.com article.
To view the article online, visit: http://www.underwatertimes.com/news.php?article_id=59421873610 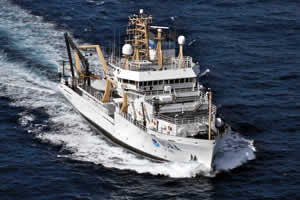 WASHINGTON, D.C. -- On Tuesday, June 15, the NOAA Ship Pisces reported a dead sperm whale floating 77 miles due south of the Deepwater Horizon spill site. NOAA is currently in the process of conducting thorough testing to determine the circumstances surrounding the mammal's death, as well as collect information about its life. This is the first dead whale reported since BP's rig exploded on April 20 It was not found in oiled waters; however, its location of death is unknown.

As soon as the whale was sighted, Pisces Field Party Chief Paul Felts called the marine mammal hotline to report the finding to the Wildlife Branch of the Unified Command and NOAA's marine mammal experts.

Based on the estimated size of the whale, scientists believe it is a sub-adult. Its condition suggests it may have been dead for between several days to more than a week. Although it was not found in oiled water, NOAA marine mammal experts are using hindcasting analysis to look into the location from which the whale carcass may have drifted.

While it is impossible to confirm whether exposure to oil was the cause of death, NOAA is reviewing whether factors such as ship strikes and entanglement can be eliminated. Samples collected from this carcass will be stored under proper protocols and handed off when the Pisces comes to port on July 2, or possibly if another boat is sent to meet the Pisces. Full analysis of the samples will take several weeks.

In accordance with the Wildlife Branch protocols, NOAA's Southeast Regional Marine Mammal Stranding Coordinator Blair Mase requested that the NOAA field crew take photographs of the approximately 25-foot whale, collect skin swab for oil analysis, collect blubber and skin samples for analysis, and measure its height in the water. Although the whale is very decomposed, the photographs and samples will help scientists better understand how long it has been dead. The blubber and skin samples will be used for genetic analysis and to determine the sex of the animal. Measurements of the whale floating in the water will be used to determine how far and how fast it might have floated from where it died. The carcass has been marked so that aerial reconnaissance teams will be able to identify the individual and will not report it as a new mortality.

NOAA and the Unified Command Wildlife Branch have had numerous reports of sperm whales seen swimming in the oil, but this is the first confirmed report of a dead whale since the BP oil spill began. NOAA remains concerned about sperm whales, which are the only endangered resident cetaceans in the upper Gulf of Mexico. Sperm whales spend most of their time in the upper Gulf offshore area, live at depth in areas where subsurface dispersants and oil are present, and feed on deepwater squid, which may also be impacted by the oil and dispersants.

The NOAA Ship Gordon Gunter sailed yesterday for a multi-week cruise to do photo identification, assessments, tagging, biopsies, and prey-density studies for sperm whales and Bryde's whales. Nearshore and offshore response efforts are continuing, and include investigations to determine cause of death or illness for dolphins that have stranded and aerial surveys for cetaceans throughout the area. The information gained from these efforts will help assess the impacts of this event on cetaceans in the Gulf of Mexico.