This is a printer version of an UnderwaterTimes.com article.
To view the article online, visit: http://www.underwatertimes.com/news.php?article_id=58914210370 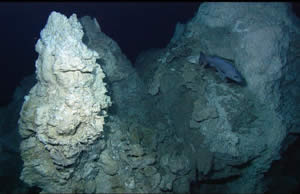 A 3-foot-long wreckfish swims by a portion of an 18-story (60 meter) chimney in the Lost City hydrothermal vent field. credit D. Kelley 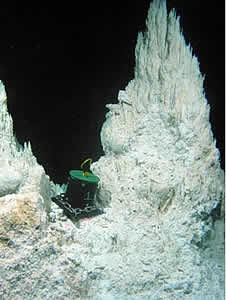 An experimental chamber is used to study how microorganisms interact with rock that underlies the field. credit D. Kelly University of Washington

SEATTLE, Washington -- On the marine microbial stage, there appears to be a vast, varied group of understudies only too ready to step in when "star" microbes falter.

At least that's what happens at the Lost City hydrothermal vent field, according to work led by the University of Washington and published this week in the Proceedings of the National Academy of Sciences.

The Lost City hydrothermal vent field in the mid-Atlantic Ocean is the only one of its kind found thus far. It offers scientists access to microorganisms living in vents that range in age from newly formed to tens of thousands of years old. A bit player found in scant numbers in the younger, more active vents became the lead actor in a chimney more than 1,000 years old where venting has moderated and cooled, changing the ecosystem.

This is the first evidence that microorganisms can remain rare for such a long time before completely turning the tables to become dominant when ecosystems change, according to William Brazelton, a University of Washington postdoctoral researcher. It seems logical, but until recently, scientists weren't able to detect microorganisms at such low abundance, Brazelton says.

It was in 2006 that scientists, led by Mitchell Sogin of the Marine Biological Laboratory at Woods Hole, Mass., and a co-author on this week's PNAS paper, published the first paper saying microorganisms in the marine environment had been woefully undercounted. They used the latest DNA sequencing techniques and said marine microorganisms could be 10 to 100 times more diverse than previously thought. They coined the term "rare biosphere" to describe a vast but unrecognized group of microorganisms -- "rare" because each kind of microorganism, or taxa, appeared to be present in only very low numbers or abundance, so low that they were previously undetectable.

If the new way of determining microbial diversity was accurate, scientists were left to wonder why such a large collection of low-abundance organisms existed.

"A fundamental prediction of the 'rare biosphere' model is that when environmental conditions change, some of these rare, preadapted taxa can rapidly exploit the new conditions, increase in abundance and out-complete the once abundant organisms that were adapted to past conditions," Brazelton and his co-authors wrote. Yet, they continued, "No studies have tested this prediction by examining a shift in species composition involving extremely rare taxa occurring during a known time interval."

Lost City was discovered during a National Science Foundation expedition in 2000 by UW oceanography professor and paper co-author Deborah Kelley and others. They were on board the research vessel Atlantis, which is one reason the field was called Lost City. The hot springs form in a very different way from the metal-rich, 700 degrees F black smoker vents scientists have known about since the 1970s. Water venting at Lost City is generally 200 F or less and the chimneys, vents and other structures at Lost City are nearly pure carbonate, the same material as limestone in caves. They are formed by a process called serpentinization, a chemical reaction between seawater and mantle rocks that underlie the field. The vent waters are highly alkaline and enriched in methane and hydrogen gases -- important energy sources for the microbes that inhabit Lost City.

Lost City also differs from the magma-driven hydrothermal systems in that it is very long-lived.

Whereas there have been numerous seasonal and short-term studies of microbial responses to environmental changes -- lasting years at the most -- the Lost City hydrothermal vent field provided a way to look at changes in vent ecosystems 1,000 years apart in age.

Analyses by Brazelton and colleagues revealed that DNA sequences that were rare in younger vents were abundant in older ones. Because it is likely that the older Lost City chimneys vented higher-temperature, more alkaline fluids when they were younger, scientists think that as the ecosystem changed some of the rare microorganisms came to the fore.

This round of near-disappearance and then dominance could have happened repeatedly during the 30,000 year lifetime of the Lost City vent field so the microorganisms present today are "pre-adapted" to certain conditions and are just waiting for the ecosystem to suit them best.

"The rare biosphere of the Lost City microbial community represents a large repository of genetic memory created during a long history of past environmental changes," the authors write. "The rare organisms were able to rapidly exploit the new niches as they arose because they had been previously selected for the same conditions in the past."

Co-author Sogin says: "The ecological shifts over time spans of thousands of years at Lost City show that some of these rare organisms that are very closely related to the dominant taxa are not artifacts of DNA sequencing. The organisms are real, they are capable of growing and very subtle shifts resulted in them becoming winning populations."