This is a printer version of an UnderwaterTimes.com article.
To view the article online, visit: http://www.underwatertimes.com/news.php?article_id=57208346910 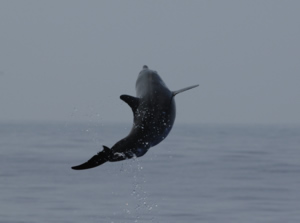 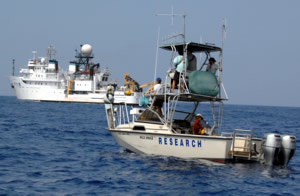 WASHINGTON, D.C. -- NOAA’s Fisheries Service, in partnership with top international scientists and the U.S. Navy, has just completed a pioneering research effort in Hawaii to measure the biology and behavior of some of the most poorly understood whales on Earth. During the study, for the first time, scientists attached listening and movement sensors on marine mammals around realistic military operations.

Using satellite-linked and underwater listening tags to monitor movement and behavior, NOAA and partnering scientists tagged more than thirty individual marine mammals of four different species. They measured how deep-diving marine mammals feed, interact with one another, dive and respond to sounds in their environment in this pioneering pilot project carried out in conjunction with the Navy’s Rim of the Pacific (RIMPAC) 2008 exercises.

Scientists used the naval military exercises, hosted biennially by the U.S. Pacific Fleet, as an opportunity to learn more about deep-diving whales and how they might respond to military sonar in their environment. RIMPAC includes the use of mid-frequency active sonar for anti-submarine warfare training in various areas around Hawaii. Transmissions were not directed at marine mammals for the study. Scientists and the Navy used mitigation measures to minimize exposure to nearby mammals.

Dr. Brandon Southall, director of NOAA’s Ocean Acoustics Program and co-funder of the project says that this study has already produced major advances, including ground-breaking measurements of basic biological factors, such as increased data on individual animals. Although this area of study is relatively new and challenging, scientists around the world are developing sophisticated technologies, and partnering to learn more about how human sounds affect marine mammals.

“The study of marine mammal acoustics and behavior is an area of emerging interest for many reasons, but there have been many recent advances, including this recently completed study” Southall said. “We were fortunate to have some of the best scientists in these fields working with NOAA on this pilot project. It will take some time to analyze the data and see what conclusions may be drawn, but in many ways this effort lays the foundation for more sophisticated collaborative efforts in the future.”

Operating from the NOAA research vessel Oscar Elton Sette and smaller boats, scientists placed monitoring tags on deep-diving beaked, pilot and melon-headed whales, as well as false killer whales. Some devices recorded short duration bits of detailed information about how the animals move and the sounds they make and hear. Others provide, and continue to provide, longer-term data on their geographical movements around the Hawaiian Islands. Photo identification and other basic biological measurements were made on nearly a dozen cetacean species in total throughout the project.

The diversity of the research team includes scientists from Cascadia Research Collective, Woods Hole Oceanographic Institution, Duke University, NOAA’s Pacific Islands Fisheries Science Center, the University of Hawaii, and the Wild Whale Research Foundation. NOAA understands and predicts changes in the Earth's environment, from the depths of the ocean to the surface of the sun, and conserves and manages our coastal and marine resources.