This is a printer version of an UnderwaterTimes.com article.
To view the article online, visit: http://www.underwatertimes.com/news.php?article_id=56941018023 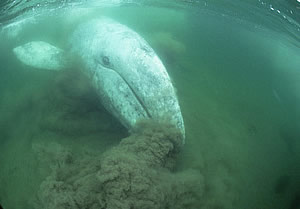 BERKELEY, California -- Gray whales survived many cycles of global cooling and warming over the past few million years, likely by exploiting a more varied diet than they do today, according to a new study by University of California, Berkeley, and Smithsonian Institution paleontologists.

The researchers, who analyzed California gray whale (Eschrichtius robustus) responses to climate change over the past 120,000 years, also found evidence to support the idea that the population of gray whales along the Pacific Coast before the arrival of humans was two to four times today's population, which stands at about 22,000. The whale is considered a conservation success story because protections instituted as early as the 1930s have allowed populations to rebound from fewer than 1,000 individuals in the early 20th century, after less than 75 years of systematic whaling.

"There almost certainly were higher gray whale populations in the past," said evolutionary biologist David Lindberg, a UC Berkeley professor of integrative biology who coauthored the paper with his former student, Nicholas D. Pyenson, now curator of fossil marine mammals at the Smithsonian in Washington, D.C. The paper appears today (Wednesday, July 6) in the online, open-access journal PLoS ONE.

Lindberg and Pyenson suggest that higher populations in the past were possible because gray whales utilized a greater variety of food resources â resources that today's whales are only now beginning to exploit. According to Lindberg, gray whales were once thought to feed only by suctioning seafloor sediment and filtering out worms and amphipods â so-called benthic organisms. But some whales are now eating herring and krill as well, just like their baleen whale relatives, which include the humpback and the blue.

Some whales are even dropping out of the migratory rat race. One group hangs out year-round off Vancouver Island in Canada, where they chase herring and krill.

"We propose that gray whales survived the disappearance of their primary feeding ground by employing generalist filter-feeding modes, similar to the resident gray whales found between northern Washington State and Vancouver Island," the scientists wrote in their paper.

"A combination of low population numbers and a species migrating between places where humans didn't bother them gave us the impression that gray whales have a stereotypical migratory and feeding behavior that may not be historically correct," Lindberg said.

The new population numbers accord with a 2007 estimate that the California gray whale population was likely 76,000 to 120,000 before humans began hunting them. That estimate, by Stephen Palumbi of Stanford University and his collaborators, was based on an analysis of gray whale genetic diversity.

The numbers clash, however, with claims by some ecologists that populations of between 15,000 and 20,000 are likely the most that the Pacific Coast â specifically along the whales' 11,000 kilometer (6,900 mile) migratory route from Baja California to the Bering Sea â could support, today or in the past.

"Our data say that, if the higher estimates are right, gray whales would have made it through the Ice Ages in numbers sufficiently large to avoid bottlenecking," Pyenson said. "If gray whale populations were at the lower levels, they would only have squeaked through the ice ages with populations of hundreds or a few thousand. That would have left bottlenecking evidence in their DNA."

Bottlenecking is when populations drop so low that inbreeding becomes common, decreasing the genetic diversity in the species and making them less able to adapt to environmental change.

The new assessment is good news for gray whales, which appear to have "a lot more evolutionary plasticity than anyone imagined," Lindberg said. This could help them survive the climate change predicted within the next few centuries that is characterized by an expected sea level rise of several meters.

"I suspect the gray whales will be among the winners in the great climate change experiment," Pyenson said.

Lindberg and Pyenson initiated the study several years ago in the face of conflicting and contentious estimates for past gray whale populations. They thought that an understanding of how gray whales adapted to climate change over the past 3 million years, the period called the Pleistocene, might provide insight into how they will adapt to climate change today.

Since gray whales arose â the oldest fossils date from 2.5 million years ago â Earth has gone through more than 40 major cycles of warming and cooling, each of which significantly affected the world's flora and fauna. During the last glacial cold spell, between 50,000 and 10,000 years ago, most of the large terrestrial mammals disappeared through a combination of climate change and human depredation, Lindberg noted. The marine realm, however, experienced almost no extinctions and very few new originations during that same period.

The California, or eastern, gray whale, one of two surviving populations of gray whale, can be traced back about 150,000-200,000 years. Pyenson and Lindberg looked closely at only the past 120,000 years, during which Earth transitioned from a warm period to a glacial period and then to today's warmer climate.

During the glaciated period, ocean water became locked up in land-based glaciers, drawing down the sea level by about 120 meters, or nearly 400 feet. That drop eliminated nearly 60 percent of the Bering Sea Platform, a shallow area that is part of the continental shelf and the major summer feeding area for today's gray whales. Gray whales can engage in benthic feeding no deeper than about 75 meters (250 feet), Pyenson said, and during the glacial period, waters offshore of the Bering platform would have been much deeper than that.

"If gray whales were primarily feeding on the Bering Platform, it's hard to see how they could have avoided a population crash," Lindberg said.

By calculating the amount of food lost because of dropping sea levels, and combining this with estimates of the food needed to keep a whale alive, the two researchers calculated the impact of global cooling on gray whale populations and the populations that would have had to exist in order for the whales to survive.

They concluded that populations would have had to have alternative feeding modes sufficient to support a population of around 70,000 during warm periods so that population drops during glacial periods wouldn't be below 5,000-10,000 whales. Much lower numbers would have produced a genetic bottleneck obvious in the DNA of the whales, and such a signature has not yet been seen.

"We don't yet have the ability to look deep enough into the whale genome to see this type of bottleneck," Pyenson added, though genetic analysis that has been done shows no evidence of a bottleneck much shallower in time, just before humans targeted the mammals for whaling.

The carrying capacity of the North Pacific could have been as high as 170,000, "assuming modern day values for benthic productivity, food density, and gray whale energetics," the authors concluded. If gray whales also exploited non-benthic organisms, such as krill, the populations could have been even higher.

If gray whales do respond well to the rising temperatures and sea levels predicted for the future, that may not be true for the birds and other marine mammals that feed in the Bering Sea, one of the most productive marine ecosystems during the summer.

"If this environment disappears in glacial maxima, we really need to rethink what we know about the ecological history of all the other organisms that make a living in the Bering Sea," Pyenson said. He and Lindberg urge other scientists to focus on the historical ecology of species to fully understand their complex interactions with a changing environment.

"We really make a lot of conservation decisions without a lot of data," Lindberg said. "Integrating paleontological and geological data in the context of known ecological traits can help us address impending biological changes in marine ecosystems."