This is a printer version of an UnderwaterTimes.com article.
To view the article online, visit: http://www.underwatertimes.com/news.php?article_id=56319082104 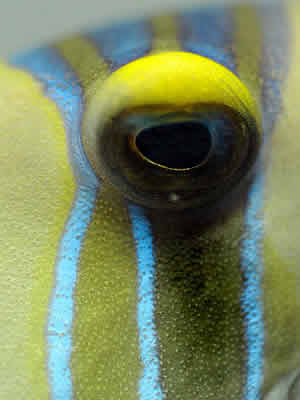 Close up of a trigger fish's eye

QUEENSLAND, Australia -- Most people wouldn't give a second thought to the inner workings of the fish eye.

But research by University of Queensland scientists is unlocking the secrets hidden behind these fishy lenses.

Professor Justin Marshall, and colleagues from the Sensory Neurobiology Group within UQ's Queensland Brain Institute, have found, for the first time, how certain types of fish see color.

Professor Marshall's work revolves around the role double cones play in the vision of trigger fishes.

Cones are light sensitive cells in eyes that allow us to see, and double cones are two such cells fused together.

“It has been suggested that double cones are used for achromatic (non-color) tasks such as luminance, motion and polarization vision,” Professor Marshall said.

“This is the first direct evidence that individual members of double cones are used in color vision as independent spectral channels.”

“This is odd as they are the commonest photoreceptor in the eyes of most diurnal animals and these new results show for the first time that in the trigger fish, a colorful inhabitant of The Great Barrier Reef, these cones are used for color vision.”

He said while the eyes of most vertebrates including fish, frogs, reptiles and kangaroos, are packed with double cones, their function was not previously known.

“These photoreceptors are not present in human retina or other placental mammals and, perhaps as a result, we have overlooked the fact that we do not know what they do,” he said.

“The discovery that reef fish use double cones for color vision solves a centuries old mystery.”

The research, which was a collaboration between UQ researchers and Dr Misha Vorobyev, from the University of Auckland, was published recently in scientific journal Biology Letters.