This is a printer version of an UnderwaterTimes.com article.
To view the article online, visit: http://www.underwatertimes.com/news.php?article_id=56210840179 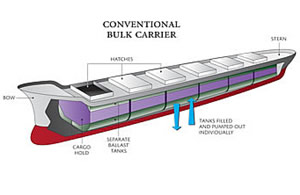 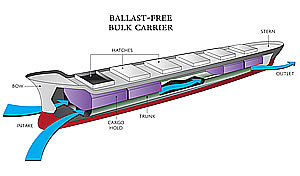 ANN ARBOR, Michigan -- University of Michigan researchers are investigating a radical new design for cargo ships that would eliminate ballast tanks, the water-filled compartments that enable non-native creatures to sneak into the Great Lakes from overseas.

At least 185 non-native aquatic species have been identified in the Great Lakes, and ballast water is blamed for the introduction of most—including the notorious zebra and quagga mussels and two species of gobies.

This week, the U.S. Saint Lawrence Seaway Development Corp. will implement new rules designed to reduce Great Lakes invaders. Ships will be required to flush ballast tanks with salt water before entering the Seaway, a practice corporation officials describe as an interim measure, not a final solution.

Meanwhile, Congress is considering legislation that would force freighters to install costly onboard sterilization systems to kill foreign organisms in ballast water. The systems use filters, ultraviolet irradiation, chemical biocides and other technologies, and can cost more than $500,000.

The U-M ballast-free ship concept offers a promising alternative that could block hitchhiking organisms while eliminating the need for expensive sterilization equipment, said Michael Parsons, professor of naval architecture and marine engineering and co-leader of the project.

"There is no silver bullet. But the ballast-free ship has the potential to be an economic winner while addressing the ballast problem in a serious way," Parsons said.

Ships take on ballast water for stability when they're not carrying cargo. They discharge ballast when they load freight, expelling tons of water and anything else—from pathogenic microbes to mollusks and fish—that's in it.

Instead of hauling potentially contaminated water across the ocean, then dumping it in a Great Lakes port, a ballast-free ship would create a constant flow of local seawater through a network of large pipes, called trunks, that runs from the bow to the stern, below the waterline.

"In some ways, it's more like a submarine than a surface ship," Parsons said. "We're opening part of the hull to the sea, creating a very slow flow through the trunks from bow to stern.

"You're continuously sweeping water through the ship and out," he said. "So you're always filled with local sea water, not hauling water from one part of the world to the other."

The U-M ballast-free ship concept was conceived in 2001 and patented in 2004. It is intended for new-vessel construction only.

With funding from the Great Lakes Maritime Research Institute, Parsons and his colleagues recently built a 16-foot, $25,000 wooden scale model of an oceangoing bulk carrier to test the concept.

The work is underway at the U-M Marine Hydrodynamics Laboratory's towing tank, the oldest facility of its kind that is owned by a U.S. educational institution.

In addition to helping fine tune the design, results from the latest round of tank tests and computer simulations suggest the ballast-free ship will deliver an unforeseen benefit. The design appears to provide a significant savings—possibly as much as 7.3 percent—in the power needed to propel the ship.

For a 650-foot bulk carrier hauling 32,000 metric tons of cargo from the Great Lakes to Europe and back, that translates into a roundtrip fuel savings of roughly $150,000. A report on the latest test results, including their economic implications, will be published next month in the Transactions of the Society of Naval Architects and Marine Engineers.

In upcoming towing tests, tentatively set for late June, the naval engineers will try to confirm and explain the unexpected power savings. Most of the improvement is likely due to the fact that water expelled from the stern-end of the trunks "smoothes out the flow" into the propeller, allowing it to operate more efficiently, Parsons said.

"It's a huge power reduction, a hard-to-believe improvement in power, and we have to convince ourselves that all of it is real," he said.

Building an oceangoing bulk carrier can cost $70 million. The added construction costs of the ballast-free design—for extra hull steel, trunk-isolation valves, piping and welding—would be more than offset by eliminating the filtration system and the ballast tanks.

The researchers conclude that the new design would result in a net capital-cost savings of about $540,000 per ship. Combined with the expected fuel savings, total cargo transport costs would be cut by $2.55 per metric ton.

"It seems that, compared to other ballast treatment systems, it's a viable alternative," SUNY Maritime College engineer Miltiadis Kotinis said of the ballast-free ship concept.

"We have proven that the technical part is feasible and that it can be applied to new vessel construction," said Kotinis, a collaborator on the project and a U-M alumnus. "And we have also shown that, regarding the economics, it can reduce the operating cost and reduce or even eliminate the introduction of non-indigenous aquatic species."