This is a printer version of an UnderwaterTimes.com article.
To view the article online, visit: http://www.underwatertimes.com/news.php?article_id=56172438901 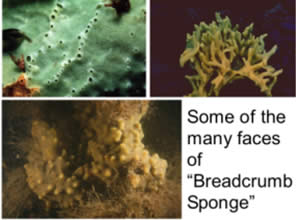 The new World Register of Marine Species (www.marinespecies.org) contains about 122,500 validated marine species names (experts having recognized and tidied up some 56,400 aliases – 32% of all names reviewed). It also contains some 5,600 images, hyperlinks to taxonomic literature and other information.

Marking the World Register’s official inauguration, some 55 researchers from 17 countries met in Belgium to plan its completion by 2010. Leading World Register experts independently estimate that about 230,000 marine species are known to science. They also believe there are three times as many unknown (unnamed) marine species as known, for a grand total on Earth that could surpass 1 million.

“Convincing warnings about declining fish and other marine species must rest on a valid census,” says Dr. Mark Costello of the University of Auckland, co-founder of the World Register and a senior Census of Marine Life (CoML) official. “This project will improve information vital to researchers investigating fisheries, invasive species, threatened species and marine ecosystem functioning, as well as to educators. It will eliminate the misinterpretation of names, confusion over Latin spellings, redundancies and a host of other problems that sow confusion and slow scientific progress.”

Some species, such as those reclassified in years past based on new information, were shown to have a handful of names or more.
In such cases, the oldest name trumps later ones to become the valid name (though all aliases are noted to help researchers interpret centuries of scientific literature).

Popularly called Breadcrumb Sponge, Halichondria panicea is the marine world’s reigning champion of Latin aliases, with 56 synonyms appearing in taxonomic literature since its first description in 1766. Of no fixed address, it’s known to frequent floats, pilings, and the underside of rocks, smells like exploded gunpowder and takes on many guises (as shown in photos). It is also known as (AKA): Alcyonium manusdiaboli (1794), Spongia compacta (1806), Halichondria albescens (1818), Seriatula seriata (1826), Hymeniacidon brettii (1866), Pellina bibula (1870), Amorphina appendiculata (1875), Isodictya crassa (1882), Microciona tumulosa (1882), Menanetia minchini (1896), Trachyopsilla glaberrima (1931) and 44 other names.

No researcher’s work is spared – not even Carl Linnaeus, who in the 1750s overcame an international scientific Tower of Babel when it came to naming species. He instituted the two-word Latin name, starting with the (capitalized) genus, followed by a (lowercase) specific epithet, a system used ever since. Thanks to his method of binominal nomenclature, what is dubbed a bulot in French fish markets, whelk in New England, buccin in Canada, and the Wellhornschnecke of the North Sea, is known universally to scientists as Buccinum undatum.

However, over time it emerged that Linnaeus assigned four names to the same species of sperm whale, a mistake caught years ago but which still appears in world literature and databases. The World Register will clarify for all time the valid name for that whale and all other marine species for future researchers, census takers and educators alike.

Says Philippe Bouchet, a CoML scientist involved in the World Register: “Describing species without a universal register in place is like setting up a library without an index catalog.”

CoML and other explorers are finding unknown species at a rate much faster than the capacity to describe them due to a shortage of experts. Dr. Bouchet calculates that 3,800 taxonomists enter at least 1,400 new marine species into the literature every year. At this rate, the process of discovering, verifying, describing and naming all remaining unknown marine species would take over five centuries.

The global scale cooperation underway by the CoML and the World Register is a prerequisite for the more time and cost-efficient discovery and recording of ocean-dwelling species. So too are new technologies for sampling, image capture, data management, genetic analyses (e.g. DNA barcodes), new training programs for taxonomists, and online initiatives such as ZooBank, which can assign “official” permanent registration identifications to new animal species.

And it will serve as the taxonomic backbone of another funder – the Ocean Biogeographic Information System (OBIS), the CoML’s portal to vast information on species, including their global distribution and other data, adds Dr. Costello, founding chair of OBIS.

The World Register will also contribute to several related global biodiversity enterprises, including the Encyclopedia of Life (creating a webpage for every species), and Species2000 (assembling a list of valid names for the 1.8 million or so known animals, plants, and fungi, both marine and terrestrial).

“Modern technologies allow unprecedented global collaboration to consolidate, validate and advance more than 250 years of research into the diverse species that live beneath the waves,” says Dr. Edward Vanden Berghe, who heads OBIS at Rutgers University, New Jersey, and who initiated the World Register while working at the Flanders Marine Institute. “The World Register of Marine Species and the Ocean Biogeographic Information System will be major Census of Marine Life legacies.”

How many species in the sea?

The Belgium meeting affirmed that the World Register should surpass 200,000 valid names by the end of 2008 and will offer the first complete listing of the estimated 230,000+ marine species known to science when the First Census of Marine Life is released in October 2010.

“Decisions about the last few thousand species to be included could be difficult, as some descriptions are inadequate or the specimens missing,” noted CoML Chief Scientist Ron O’Dor. “Experts may disagree on the scientific validity of an entry when evidence is contentious or scant.”

The database has yet to reflect massive discovery efforts underway by CoML collaborators. Preliminary CoML estimates show many thousands of suspected new marine life species have been discovered in the first eight years of explorations, 110 of which have completed the formal description process.

The taxonomic analysis and description process means that “newly discovered” species often take years to appear in publications. The process involves exhaustive comparison, documentation, peer-review, publication, and depositing specimens in museum collections for others to access.

The CoML is the largest-ever global marine biology research project, uniting researchers from more than 80 nations with the goal of assessing and explaining the diversity, distribution and abundance of ocean life – past, present and future.

Started in 2000, some 17 projects (including 14 conducting field research) examining all aspects of sea life the world over are beginning to shift from data collection to analysis as the first Census moves towards a conclusion and synthesis report in 2010 – an unprecedented baseline of information about ocean biodiversity in a changing environment.

In isolated parts of the world, such as the deep-sea, the tropics, and the Southern Ocean swirling around Antarctica, discovery of previously undescribed species can exceed 80% of specimens captured, especially for smaller animals like crustaceans, worms and molluscs. CoML plankton project leader Ann Bucklin predicts her collaborators will at least double the number of known zooplankton species in the world, which in 2008 consisted of 7,000 species in 15 different phyla.

“Discovering a species never known to science before is one of the great prizes of marine research,” says Ian Poiner, Australia-based chair of CoML’s Scientific Steering Committee. “The accomplishment earns the researcher the hard-earned right to bestow the species with a name.

“For years to come, as new species discoveries are validated and enter the literature, some individual researchers could earn that right hundreds of times over – and we look forward to seeing thousands of new species identified through the Census eventually fed to the World Register.”

“What may appear a simple task on the surface is in fact two-fold: the names of every known species have first to be validated, and the register must also simultaneously try to keep pace with new discoveries,” says World Register data manager Ward Appeltans of the Flanders Marine Institute (VLIZ), noting that one expert representing each taxonomic group is assigned to control the quality of the databank’s content.

“The fact that every year scientists still find more than 100 new marine fish species in the sea is astonishing,” he adds. “While we are looking up to search for life on Mars, there is still so much beauty to discover at our feet.”