This is a printer version of an UnderwaterTimes.com article.
To view the article online, visit: http://www.underwatertimes.com/news.php?article_id=54381020961 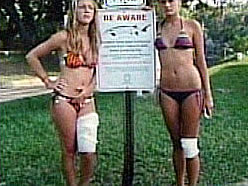 Two of the injured teens show their wounds from the flying fish attack.

ORLANDO, Florida -- Three Florida teens have quite a tale to tell after some flying fish injured them while on a trip to North Florida.

"We all started crying and screaming and stuff," Allie Katrick said.

Pictures after the attack showed Katrick visibly shaken, with large cuts on her legs and those of her friend, Kori Snitker.

"It happened so fast. It just jumped out and hit the side of our legs, and we just started screaming," Kori said.

"I remember it landing on me at first, and it was heavy," added Allie.

Katelyn Burroughs said the large amount of blood made her wonder if Allie had lost a finger.

Burroughs was vacationing with Snitker, Katrick and their families on the Suwannee River, where officers with the Fish and Wildlife Conservation Commission are warning that it could be the worst year on record for sturgeon strikes.

The giant spawning fish can weigh as much as 200 pounds.

"They have this goo or slime on the fish, and it was all over my fingers, and it looked like it was chopped off," Allie said.

One woman was knocked unconscious when she was struck by the sturgeon in one of the five documented cases.

The girls said they aren't going to be next.

"It was very scary what happened to me. I'm never going back," Katelyn added.