This is a printer version of an UnderwaterTimes.com article.
To view the article online, visit: http://www.underwatertimes.com/news.php?article_id=54329610107 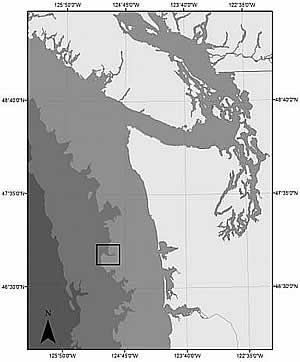 The box shows the approximately 2-square-mile area where researchers discovered both large colonies of glass sponges. Credit: University of Washington 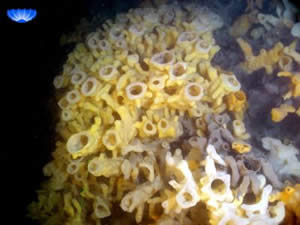 A reef of glass sponges seen in a 2005 photo from British Columbia waters. Credit: University of Victoria

SEATTLE, Washington -- Thirty miles west of Grays Harbor, University of Washington scientists have discovered large colonies of glass sponges thriving on the seafloor. The species of glass sponges capable of building reefs were thought extinct for 100 million years until they were found in recent years in the protected waters of Canada's Georgia and Hecata straits, the only place in the world they've been observed until now.

The discovery in Washington waters extends the range of reef-building glass sponges into open ocean.

"It's like looking at an overcrowded aquarium in an expensive Japanese restaurant," he says.

The Washington sponge reefs are each hundreds of feet in length and width. It's possible that the state has reefs comparable to the Canadian reefs that are miles in length, Johnson says.

The glass sponge reefs on the continental shelf west of Grays Harbor appear to be thriving on specialized bacteria that consume methane gas that the UW scientists were surprised to discover flowing out of the seafloor in copious amounts. Methane has not been detected by Canadian scientists near their glass sponge reefs, thus the Washington margin reefs could represent a new type of ecosystem on the shelf, one where the abundant biology is fueled by methane gas derived from ancient carbon in the sediments, Johnson says.

The glass sponges – so-called because their skeletons are made of silica (the same material as beach sand) – come in un-sponge-like shapes similar to cups and funnels. They range in color from creamy white to brilliant hues of yellow. The reefs build upward as new generations of sponges grow atop the still-hard silica skeletons of previous generations. The reefs just discovered are in 650 feet of water and rise between 6 and 15 feet above the seafloor. The sponges on the mounds grow as tall as 1 Â½ feet.

The mounds off Grays Harbor have the same trio of glass sponge species as the reefs discovered in Canadian waters. The reefs in the Georgia and Hecata straits are in relatively protected marine waters, causing scientists to previously speculate that those reef-building glass sponges required a special ecological niche that allowed them to grow in those waters.

The field discovered on the open Washington shelf is very exposed to winter storms, which makes it much more likely that other reef-building glass sponges are still to be found around the globe, for example, on the Alaskan and Russian continental shelves, Johnson says.

Solitary glass sponges are found living in many parts of the world's oceans but are composed of different species than the ones capable of colonizing themselves into reefs. Individual glass sponges generally live 100 to 200 years and the Canadian sponge reefs have been dated as being 8,000 years old, making them comparable to coral reefs and redwood forests, Johnson says.

The reef-building sponge species had their heyday 150 million years ago when ocean conditions allowed them to grown near the surface of the ocean. Their fossilized remains, for example, are found in outcrops that are hundreds of miles long on land throughout Europe, all sites that were underwater in the late Jurassic period. It was thought the reef-building glass sponges were all driven to extinction 100 million years ago when diatoms, single-celled algae that also require silica dissolved in seawater, evolved in the global oceans and began using up the silica needed by the reef-building glass sponges.

The Washington and British Columbia reef-building glass sponges have learned to live at water depths that are below the sunlit zone where diatoms live but where the essential dissolved silica they need is available.