This is a printer version of an UnderwaterTimes.com article.
To view the article online, visit: http://www.underwatertimes.com/news.php?article_id=53817104960 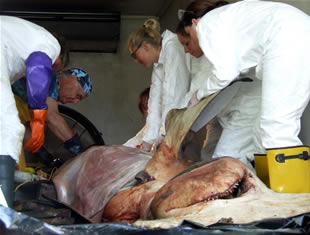 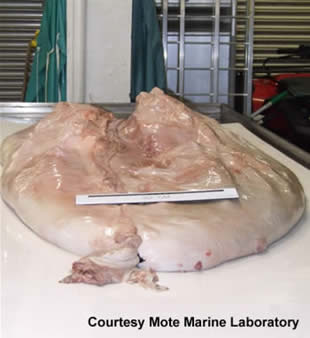 The placenta from the great white shark; the ruler reads 30cm, or approx. 1 foot 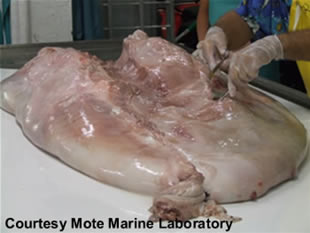 Cutting into the placenta 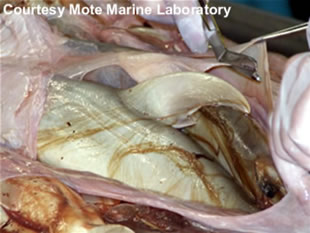 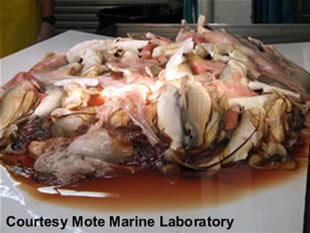 All the sharks exposed 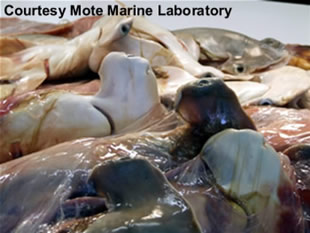 The shark was thought to be days away from giving birth 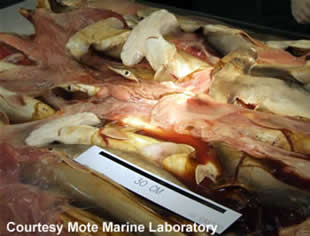 MIAMI, Florida -- Underwatertimes.com has obtained photographs from the necropsy of the world-record great hammerhead shark caught by a recreational fishermen in May off Boca Grande, Florida. The necropsy was performed by scientists at the Mote Marine Laboratory in Sarasota, Florida.

The results from the necrospys follows:

The shark was measured at 14 feet long and 1,280 pounds, with its hammer measuring more than 3 feet across. The great hammerhead, Sphyrna mokarran, was found to have 55 shark pups, including 52 that were nearly full-term and three that were undeveloped. That represents the largest litter of pups ever found in a great hammerhead shark and scientists at Mote believe this shark was just days away from giving birth. Experts previously believed that great hammerheads gave birth to 20 to 40 pups at a time, so the information gathered from this shark is new knowledge about the species. By comparison, whale sharks â the biggest fish in the ocean â give birth to about 300 pups at a time and smaller sharks give birth to two to 10 pups at a time.

While the status of great hammerheads in the wild is uncertain â and it is legal to harvest them experts believe their populations are depleted due to fishing pressure and habitat loss.

"Although we are thankful that the fisherman gave this unique specimen to Mote, and we are learning a lot about this species from this large female shark, we were saddened to see so many unborn pups inside her so close to birth," said Dr. Robert Hueter, director of Moteâs Center for Shark Research. "We ask fishermen not to kill sharks for sport and to remember that shark populations have been severely depleted by overfishing. Very large sharks like this hammerhead are often pregnant females that help maintain the status of the speciesâ population into the future. We advocate release of these large sharks and the tagging of them whenever possible." The shark carcass has been moved to Ocean Creations in Dover, Fla., where owner Steve Brancati will take a plaster cast for mounting. A full cast will be made and an educational exhibit about sharks and their status will be created at Mote Aquarium. Mote expects the shark display to go up in the fall.