This is a printer version of an UnderwaterTimes.com article.
To view the article online, visit: http://www.underwatertimes.com/news.php?article_id=53064827109 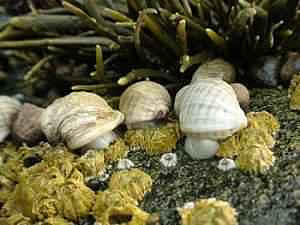 Fully half the population of native oysters in the coastal estuary has fallen victim to a predatory whelk snail indigenous to the Atlantic Ocean, according to a California Sea Grant-funded study published in the July issue of the journal, Oecologia.

The Atlantic snail, a type of oyster drill, devastates oysters by boring into their shells and digesting soft tissue inside. The destructive snail was inadvertently brought to the West Coast decades ago with shipments of Atlantic oysters, which people attempted, but failed, to culture in places such as Tomales Bay. As a result, shellfish farmers turned to growing Japanese oysters, which have proven a commercial success but have also been vectors for yet another invasive species, the Japanese oyster drill.

Although both native and non-native oyster drills now inhabit the West Coast, in the more saline reaches of Tomales Bay, near the bay's mouth, red rock crabs keep native oyster drills in check and hunt Atlantic drills to near local extinction. The indigenous crabs also scare away the invasive European green crab.

"Red rock crabs are holding the line against further invasions in Tomales Bay," says the article's lead author David Kimbro, a postdoctoral associate at Florida State University in Tallahassee who was a Sea Grant trainee at UC Davis at the project's onset. UC Davis researcher Ted Grosholz is a co-author of the article, "Invasive species cause large-scale loss of native California oyster habitat by disrupting trophic cascades."

The problem is that native crabs cannot defend the entire estuary because the crabs are fundamentally a marine species. In prime oyster habitat near the bay's head, seasonal freshwater deluges kill native rock crabs. Atlantic drills and European green crabs invade these low-salinity zones, at the expense of native oysters. Green crabs, as it turns out, are terrible Atlantic snail hunters.

"It is a characteristic of successful invasive species that they tend to be highly tolerant to salinity extremes," Kimbro says. "For Tomales Bay, this means that nearly half the habitat is inhospitable to re-establishing native oysters."

In a separate study also funded by California Sea Grant, Kimbro, Grosholz and John Largier of UC Davis' Bodega Marine Laboratory, report that native oysters grow largest in the center of Tomales Bay, likely because of an abundance of phytoplankton, on which oysters feed.

In an article to appear in the September issue of Limnology and Oceanography, the scientists link high phytoplankton concentrations in the bay's center to a variety of physical oceanographic conditions, notably tidal action.

Based on the results, Grosholz believes that oyster restoration could meet with greater success by focusing on outplanting oyster "seed" or spat in the middle of the bay, away from the drills and near an abundant food supply.

There are many reasons for wanting to rebuild healthy populations of native oysters, besides the fact that the 2-inch shellfish are delicious. The bivalves filter huge amounts of water, remove contaminants and improve water clarity. As the mollusks die, their shells become the substrate on which young oysters recruit and grow, forming complex high-relief reefs that, no differently than a coral reef, attract and sustain animals.

Cultured, exotic oysters in Tomales Bay also filter water, but, because they are grown on racks, do not provide the same ecological services as native, naturally growing oysters, Kimbro says.

In yet another component of the ongoing Sea Grant project, UC Davis graduate student Anna Deck has shown that "space competitors" from fouling organisms such as tunicates and barnacles are likely not impacting oyster survival rates in the bay.

There is also mounting evidence that hard substrate may not be a factor limiting native oyster recruitment, meaning that future re-establishment efforts may require captive rearing of native oysters for release in the wild.