This is a printer version of an UnderwaterTimes.com article.
To view the article online, visit: http://www.underwatertimes.com/news.php?article_id=53064191028 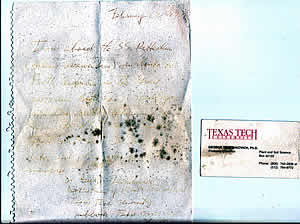 The letter was difficult to read because of sun damage, but the Australian couple said the Texas Tech business card was in good condition

LUBBOCK, Texas -- Perhaps, the lucky numbers of his stateroom â 711 âinspired his experiment.

Leaving Honolulu far behind on the way to French Polynesia sometime after the equatorial crossing ceremonies aboard Holland-America's grand ocean liner, SS Rotterdam, George Tereshkovich sat down at the writing desk.

The retired Texas Tech University plant and soil science professor dated his missive Feb. 19, 1997, and addressed it to an anonymous recipient who might find it and promised him or her a kingly $5. When finished, he placed that letter and his business card in an empty water bottle, screwed on the cap and walked out onto the aft deck.

As the sun set and the screws churned a white froth below him, Tereshkovich tossed his message into the vast blue ocean spreading out before him.

"I told the wife what I was going to do," the 81-year-old said. "She thought I was seasick or something, throwing a note overboard. We continued cruising, and I completely forgot about it."

Fourteen years later, his message in a bottle would turn up more than 6,000 miles away (a quarter of the Earth's circumference) in the dunes of the beaches of Southwestern Australia's Big Quaram Beach.

Little did he know he'd wind up owing someone that $5.