This is a printer version of an UnderwaterTimes.com article.
To view the article online, visit: http://www.underwatertimes.com/news.php?article_id=52948073101 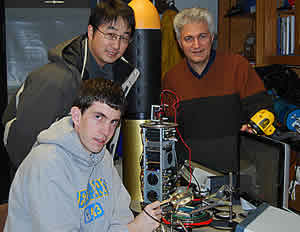 NEWARK, Deleware -- Torpedo-like autonomous underwater vehicles (AUVs) swim untethered through the ocean collecting data in places scientists could never go themselves. Thanks to University of Delaware researchers, these tools of the marine studies trade are getting an upgrade.

Until now, scientists were limited to waiting until an AUV returned from a mission in order to retrieve data or to send the vehicle off in a new direction. A new technology developed at UD will let scientists transmit data back and forth with the AUV as needed, much as if they were using a dial-up Internet connection.

"We hope this leads to technology that lets AUVs communicate even faster so that scientists and AUVs can communicate continuously," said Aijun Song, assistant research professor of physical ocean science and engineering (POSE).

Song is collaborating on the project with Art Trembanis, assistant professor of geological sciences, and graduate student Justin Eickmeier.

Mohsen Badiey, professor and director of the POSE Program, is leading the project. He also is head of UD's Ocean Acoustics Laboratory, and like his collaborators, is a member of UD's College of Earth, Ocean, and Environment (CEOE).

Members of the team are working through UD's Office of Economic Innovation and Partnerships to patent two inventions based on the innovative project, which is funded in part by the U.S. Navy through various Office of Naval Research and Defense University Research Instrumentation Program grants.

The group's work has involved the development of hardware and instrumentation as well as software to decode communication signals under water. It is based on cell phone technology but with one major difference: Instead of relying on radio waves moving through the atmosphere, it uses sound waves that move through the water.

New understanding of the physics behind sound wave propagation through water has steered the team's innovation, Badiey explained.

"The radio waves that are used in the atmosphere can't be used in the ocean because they don't penetrate the water," he said.

The technology works using an array of underwater speakers and microphones that trail behind the AUV as it glides. The array sends out information packaged as coded acoustic waves that move through the water. The AUV as well as scientists above the water's surface are equipped with specially designed software that decodes the waves into understandable information.

First to benefit from this new technology will be the users of UD's AUV, which is serving as the test vehicle for the project. Known as Dora (short for Delaware Oceanographic Research Autonomous underwater vehicle), the robot uses sonar sensors and other gauges to gather all types of vital information such as acoustic "pictures" and water quality data such as salinity and temperature.

The 9-foot, 176-pound robot has helped UD researchers study everything from coral reefs off the Caribbean island of Bonaire, to a Byzantine shipwreck in the Black Sea, to underwater habitats in Delaware Bay. During the 2010 Winter Session, the device took part in the first-ever coastal and lake AUV missions in New Zealand to study a variety of issues, including algal blooms and the ecosystem of scallops.

"The speed and efficiency of scientific discovery is tightly entwined with our underwater communication systems," Trembanis said. "The unparalleled capabilities that the new acoustic module provides will be transformative for a broad range of AUV applications."

The technology is undergoing final testing at regional acoustic facilities and in Delaware Bay before being deployed in scientific missions. Once finalized, Badiey and Song expect to see it on AUVs used by other institutions in the United States and worldwide.