This is a printer version of an UnderwaterTimes.com article.
To view the article online, visit: http://www.underwatertimes.com/news.php?article_id=52768139100 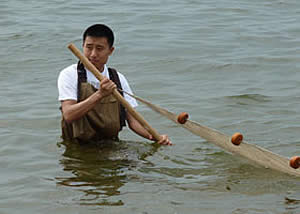 Spencer Kim may net more than just fish, thanks to an internship at Brooklyn College.

BROOKLYN, New York -- Spencer Kim, a senior at Sheepshead Bay High School, discovered he has a peculiar talent: He is an excellent dissector of fish brains.

His talent emerged during an internship in the laboratory of Assistant Professor of Biology Paul Forlano. Kim landed the internship through the New York City Science and Engineering Fair and College Now Summer Research Program, which places high school students in CUNY science labs over the summer. Forlano, who joined the college in 2009, was initially hesitant to take on a high school student who had never worked in a lab before. "My lab was just getting to be functional," he says.

Despite his reservations, Forlano recognized that Kim had gained some experience with marine biology while working as a docent at the New York Aquarium. Plus, Kim was curious about neurobiology, and that made him a natural fit in Forlano's lab, which is currently studying the brains and behavior of the plainfin midshipman fish.

"These fish are the archetypal example of how the vertebrate nervous system uses sound for social communication." Forlano explains. "One of the things that I'm interested in is how hormones affect the circuitry in the brain that controls these behaviors." Because lower-brain pathways that process sound and produce vocalization are similar in fish and mammals, his findings could have implications for human brain function.

It took Kim some time to nail down the intricate process of preparing the brains, but once he did, he makes the process sound easy: "First, you have to dissect the brain out of the fish, then mount it onto a small disc. That's basically the hardest part. Because the brain is like wobbly raw meat, getting it to stand up was difficult. Then you place it in the microtome machine, which slices it into sections." After a bit of a learning curve, Kim was handling the whole process.

Forlano explains that the program "gives students an opportunity to learn hands-on techniques in a university laboratory and to discover perhaps a hidden talent in anatomy or molecular biology that they would never experience as a high school student or even a college student."

It's too soon to tell if Kim's new lab talents will play a part in his future, but Brooklyn College certainly may: He has been accepted into the college's Macaulay Honors College. He's waiting to hear from several other schools before making a final decision on where he'd like to added, but the lab certainly impressed on him. "They were all so willing to teach me the proper techniques and procedures. Even though they were really focused on this one goal, the lab was a relaxed setting."