This is a printer version of an UnderwaterTimes.com article.
To view the article online, visit: http://www.underwatertimes.com/news.php?article_id=52361078094

Magnificent Deep-Sea Corals Discovered In The Mediterranean; 'We Did Not Expect, Know, Or Even Imagine'
Underwatertimes.com News Service
October 4, 2010 21:55 EST 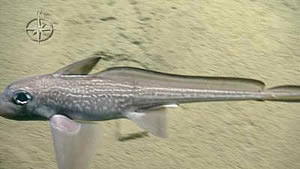 Eploration vessel "Nautilus " discovered for the first time reefs with deep-sea corals in the Mediterranean, offshore of Israel. Credit Nautilus

HAIFA, Israel -- The exploration vessel Nautilus, with a team of experts of the University of Haifa's Leon H. Charney School of Marine Sciences, headed by Prof. Zvi Ben Avraham, discovered for the first time an area of reefs with deep-sea corals in the Mediterranean, offshore of Israel. This area apparently stretches over a few kilometers, 700 meters under the surface and some 30-40 km off the coast of Tel Aviv. According to the researchers, this southeastern region of the Mediterranean has only sparse sea life and therefore the discovery is in fact parallel to discovering an oasis in the middle of an arid expanse. "We did not expect, know, or even imagine that we would come across these reefs and certainly not such large ones. It's like finding a flourishing oasis in the middle of the desert," said Dr. Yizhaq Makovsky, who directed the University of Haifa control center for the project.

After two and a half weeks at sea, during which time the ship's robots plunged as far as 1.7 km down into the depths of the Mediterranean, the Nautilus returned to land and the collaborative research team have begun to examine the many discoveries that they made. Probably the most significant â and most surprising â of these discoveries were the reefs of deep-sea coral, the first deep-sea coral reefs to be found offshore Israel. Their discovery has broad scientific importance. For example, they can help us in understanding the mechanisms of their survival in the environmental conditions of the deep sea, as well as unfold the history of these conditions with the effect of global changes.

"This cruise has provided a nutshell sampling of this maritime region, but our discovery only demonstrates the potential of the many surprises that await us in the depths of this area. An immediate implication of this discovery is that there is an urgent need to classify the area as a deep-sea reserve, as are other coral reef areas around the world," explained Dr. Makovsky.

In-depth research on the sea-bed samples are yet to get well under way, but additional discoveries that can already be reported from the Nautilus expedition, are two shipwrecks â probably modern boats that sunk over the past few decades; and fish and crabs that were photographed in their natural habitat for the first time, hundreds of meters beneath the Mediterranean surface.

One of the fascinating fish that were captured by the Nautilus's cameras was the Chimera Monstrosa, of the "ghost sharks" family that branched off from sharks some 400 million years ago.

The expedition also discovered and documented a 10-cm crab hiding in the recess of a rock, making it difficult for the research team to identify it. As with all the other discoveries, this crab was also documented thanks to the technological capabilities provided on the Nautilus.