This is a printer version of an UnderwaterTimes.com article.
To view the article online, visit: http://www.underwatertimes.com/news.php?article_id=51030782641 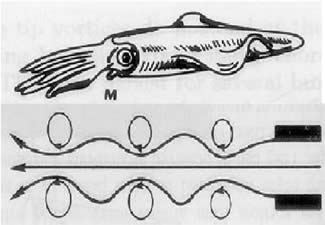 Squid propulsion is mimiced by the pulsatile jets 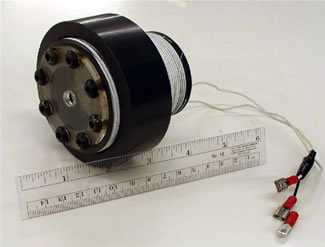 BOULDER, Colorado -- Inspired by the sleek and efficient propulsion of squid, jellyfish and other cephalopods, a University of Colorado at Boulder researcher has designed a new generation of compact vortex generators that could make it easier for scientists to maneuver and dock underwater vehicles at low speeds and with greater precision.

In addition, the technology - seemingly inspired by the plots of two classic sci-fi films - may soon allow doctors to guide tiny capsules with jet thrusters through the human digestive tract, enabling them to diagnose disease and dispense medications.

Kamran Mohseni, an assistant professor of aerospace engineering sciences, will present these and other details at the American Geophysical Union's annual fall meeting Dec. 11-15 in San Francisco. A global network of scientists, the AGU describes its mission as the advancement of terrestrial, atmospheric and space research aimed at benefiting humanity.

"Reliable docking mechanisms are essential for the operation of underwater vehicles, especially in harsh environments," Mohseni said. "We set out to resolve the trade off that many researchers settle for, which is a faster, but less precise, vehicle or a boxier one that is not as fast and more difficult to transport to work locations."

Manned and unmanned underwater vehicles enable scientific researchers to explore ecosystems around the globe, from undersea volcanoes near Hawaii to the frigid depths beneath pack ice in the North and South poles. However, while the torpedo shape of some underwater vehicles ensures rapid deployment and high cruising speeds with minimal energy, their hydrodynamic design makes them more difficult to maneuver or dock at low speeds and in tight spaces, or to hover in precise locations.

Underwater craft with boxier designs are easier to dock and maneuver, but speed is sacrificed in the process. The vortex thrusters designed by CU-Boulder researchers offer speed with versatility and may enable researchers to explore previously inaccessible places. Currently, many designers are trying to devise better docking systems for underwater vehicles, but Mohseni said he and his collaborators wanted to improve the watercrafts' actual maneuvering capabilities.

"We didn't want to treat the symptom alone," he said. "We made it our goal to resolve a widespread problem."

Mohseni created his new generators after studying the formation of vortex rings, much like those formed by squid and jellyfish to move themselves underwater. Vortex rings are formed when a burst of fluid shoots out of an opening, moving in one direction and spreading out as it curls back.

The researcher's nature-inspired vortex generators could be used in a wide array of applications. One of them, a seeming take-off of technology featured in the sci-fi cult classics "Fantastic Voyage" and "Innerspace," employs tiny capsules that could travel through the human digestive tract to diagnose and treat diseases and disperse medications.

To date, Mohseni and his collaborators in the CU-Boulder aerospace engineering department have designed and tested three separate unmanned underwater vehicles. With the latest model, the team successfully conducted a parallel parking test. The team also has designed a series of other micro vehicles for air and underwater use. A National Science Foundation grant is funding their research.