This is a printer version of an UnderwaterTimes.com article.
To view the article online, visit: http://www.underwatertimes.com/news.php?article_id=50782469110 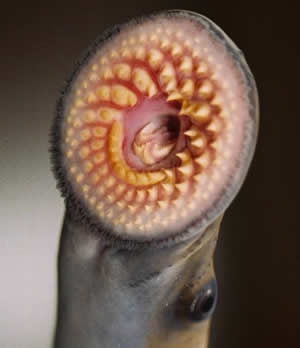 SEATTLE, Washington -- Researchers have discovered that the sea lamprey, which emerged from jawless fish first appearing 500 million years ago, dramatically remodels its genome. Shortly after a fertilized lamprey egg divides into several cells, the growing embryo discards millions of units of its DNA.

The findings were published this month in the Proceedings of the National Academy of Sciences. The lead author is Jeramiah Smith, a postdoctoral fellow in genome sciences at the University of Washington (UW) working in the Benaroya Research Institute laboratory of Chris Amemiya, who is also a UW affiliate professor of biology.

Theirs is believed to be the first recorded observation of a vertebrate -- an animal with a spinal column -- extensively reorganizing its genome as a normal part of development. A few invertebrate species, like some roundworms, have been shown to undergo extensive genome remodeling. However, stability was thought to be vital in vertebrates' genomes to assure their highly precise, normal functioning. Only slight modifications to allow for immune response were believed to occur in the vertebrate genome, not broad-scale rearrangements.

Smith, Amemiya and their research team inadvertently discovered the dynamic transformations in the sea lamprey genome while studying the genetic origins of its immune system. The researchers were trying to deduce how the sea lamprey employs a copy-and-paste mechanism to generate diverse receptors for detecting a variety of pathogens.

"The remodeling begins at the point when the embryo turns on its own genes and no longer relies on its mom's store of mRNA," said Smith.

The restructuring doesn't occur all at once, but continues for a long while during embryonic development. It took at lot of work for the scientists to see what was lost and when. They learned, among other findings, that the remodeled genome had fewer repeats and specific gene-encoding sequences. Deletions along the strands of DNA are also thought to move certain regulatory switches in the genome closer to previously distant segments.

The scientists don't know how this happens, or why. Smith said that his favorite hypothesis, yet unproven, is that the extra genetic material might play a role in the proliferation of precursor cells for sperm and eggs, and in early embryonic development. The genetic material might then be discarded either when it is no longer needed or to prevent abnormal growth.

The alteration of the sea lamprey genome and of invertebrates that restructure their genome appears to be tightly regulated, according to Smith, yet the resulting structural changes seem almost like the DNA errors that give rise to cancers or other genomic disorders in higher animals. Learning how sea lamprey DNA rearrangements are regulated during development might provide information on what stabilizes or changes the genome, he said, as well the role of restructuring in helping form different types of body cells, like fin, muscle, or liver cells.

Researchers do not yet know how the sea lamprey's genome guides the morphing it undergoes during its life. Sea lampreys have a long juvenile life as larvae in fresh water, where they eat on their own. Their short adult lives are normally spent in the sea as blood-sucking parasites. Their round, jawless mouths stick like suction cups to other fish. Several circular rows of teeth rasp through the skin of their unlucky hosts. Their appetite is voracious.

Later, as they return to streams and rivers along the northern Atlantic seaboard, sea lampreys atrophy until they are little more than vehicles for reproduction. After mating, they perish. Populations of sea lamprey were landlocked in the Great Lakes and other nearby large lakes after canals and dams were built in the early 1900's. They thrive by parasitizing (and killing) commercially important fish species and are considered a nuisance in the Great Lakes region.

Biologists are interested in the sea lamprey partly because of its alternating lifestyles, but largely because it represents a living fossil from around the time vertebrates originated. Close relatives of sea lampreys were on earth before the dinosaurs. It's possible that the sea lamprey's dynamic genome biology might someday be traced back in evolutionary history to a point near, and perhaps including, a common ancestor of all vertebrates living today, the authors of the study noted.

"Sea lampreys have a half billion years of evolutionary history," Smith said. "Evolutionary biologists and geneticists can compare their genomes to other vertebrates and humans to see what parts of the lamprey genome might have been present in our primitive ancestors. We might begin to understand how changes in the sea lamprey genome led to their distinct body structure and how fishes evolved from jawless to jawed."

Amemiya added, "We don't really know where this discovery about the sea lamprey's remodeling of its genome will take us. It's common in science for the implications of a finding not to be realized for several decades. It's less about connecting the dots to a specific application, and more about obtaining a broad understanding of how living things are put together."

In addition to Smith and Amemiya, the other researchers on this study were Francesca Antonacci and Evan E. Eichler of the UW Department of Genome Sciences. Research grants from the National Institutes of Health, the National Science Foundation and the Howard Hughes Medical Institute funded the project. Smith also received National Research Service Awards, including an Institutional Ruth L. Krischstein Award through the University of Washington Department of Genome Sciences and an individual Ruth L. Krischstein Award through the National Institute of General Medical Sciences.