This is a printer version of an UnderwaterTimes.com article.
To view the article online, visit: http://www.underwatertimes.com/news.php?article_id=50110746983 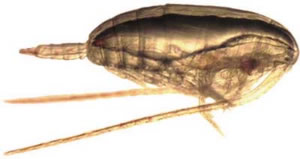 BELFAST, Northern Ireland -- Researchers at Queen's University Belfast have found that the main source of food for many fish - including cod - in the North Atlantic appears to adapt in order to survive climate change.

Billions of Calanus finmarchicus, a plankton species, which are just a few millimetres in size, live in the waters of the North Atlantic where the research was carried out.

It showed they responded to global warming after the last Ice Age, around 18,000 years ago, by moving north and maintaining large population sizes and also suggests that these animals might be able to track the current change in habitat.

The effect of global climate change on the planet's ecosystems is one of the key issues scientists are currently focussing on and the research has been published in Proceedings of the Royal Society B, a publication of the national academy of science of the UK and the Commonwealth, today.

One of the main predicted effects of climate change is a forced shift in species' distribution range.

The study leader, Dr Jim Provan, from Queen's School of Biological Sciences, said the discovery that that a species has a feature which helps it cope with global warming is a rare example of good news.

"Our results, in contrast to previous studies, suggest that the species has been able to shift its distribution range in response to previous changes in the Earth's climate, and thus 'track' the effects of climate change, a feature which may be of crucial importance in its survival.

"The genetic variability of the species - the tendency of the genetic make-up of a population to vary from one individual to another - has remained high, which is good news, and suggests that these animals might be able to track the current change in habitat resulting from global warming and maintain viable population sizes.

"If the species couldn't, it might become extinct and thus threaten the fish species that depend upon it for food.

"It might be a rare example of news that may not be doom-and-gloom with respect to climate change, but it doesn't mean that we don't have to keep watching what happens."

Previous work on the species had indicated a serious drop in numbers and decreases in population size may be reflected in decreases in genetic variability.

This can compromise the adaptive potential of the populations for the future and possibly result in extinction.

As a result of the Queen's findings the team is planning further work to see how the study applies to rapid global warming over the last few decades.