This is a printer version of an UnderwaterTimes.com article.
To view the article online, visit: http://www.underwatertimes.com/news.php?article_id=49238105067

Record As Humpback Whale Swims A Quarter Of The World In Search For Mate
Underwatertimes.com News Service
October 12, 2010 21:07 EST 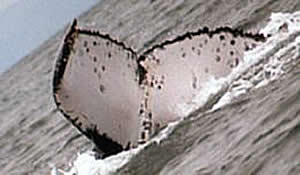 The whale's tail fluke was spotted off. credit Freddy Johansen

BAR HARBOR, Maine -- When Norwegian tourist Freddy Johansen snapped a photograph of a diving humpback whale in Madagascar, he had no idea that his vacation excursion would lead to an important scientific discovery. Researchers from College of the Atlantic's Allied Whale saw the image on the internet and found that the same whale had also been photographed in the waters off Brazil. Not only did this journey take the whale a quarter of the way around the globe - further than that recorded by any mammal, ever - the whale moved between two different breeding groups, a rare occurrence for this species. This finding, published in the United Kingdom's Royal Society scientific journal Biology Letters, has implications for understanding and managing whale populations worldwide, say College of the Atlantic (COA) scientists.

According to Peter Stevick, an Allied Whale research associate, this whale's journey is remarkable for both its distance and its destination. It is nearly twice as far as the passage typically made by humpbacks in their annual north-south migration between winter breeding grounds in warm tropical waters and the nutrient-rich colder waters where they feed in summer. This whale has traveled across the Atlantic Ocean, around Africa and well into the Indian Ocean. Humpback whales seldom move between breeding areas, so the breeding groups or stocks are thought to be isolated from one another. Even more unusual, this whale is a female. Usually it is the males who are the long-distance travelers.

Says Stevick, a COA alumnus, "While the journey of this one whale is extreme, her example shows us that we should pay attention; whales may not always do what we expect, or remain in tidy groups. The picture of their behavior is messier, and their east-west movement could well be more important than we have previously recognized. Because of that, our management focus needs to be more expansive."

Humpback whales were hunted to exceedingly low numbers in past centuries, and those in the Southern Hemisphere were particularly devastated. Some 200,000 were killed before hunting was outlawed in the 1960s. While humpbacks have recovered well in some places, they remain scarce in others. Discovering how they move between regions helps scientists understand the way in which their populations respond both to the end of hunting and to ongoing human impacts such as ship strikes or fishing gear entanglements.

The connection between the two distant sightings of this wandering female was made possible thanks to pioneering work in the 1970s by researchers and students at COA, proving that the humpback whales have distinctive tail markings. Like human fingerprints, these markings distinguish individual animals. This revolutionary discovery enables scientists to follow individual whales with a camera and telephoto lens.

Allied Whale, COA's marine mammal research program, has been curating extensive photographic catalogs of humpback whales for over 30 years, projects that depend upon international collaboration and the willingness of scientists and individuals to share data. The catalogs consist of photographs from breeding and feeding areas throughout the humpback's range in both northern and southern hemispheres, providing a unique clearinghouse for scientific analysis of humpback movements.

This whale was first identified by scientist Mariana C. Neves who studies whales off Brazil through the Instituto Balaie Jubarte. Johansen, who took the matching photograph just over two years later, represents the hundreds of tourists, tour guides, and other non-scientists who have contributed photographs to the effort. Other non-specialists, including students and volunteers, assist scientists in matching diverse images. The two sightings of this whale were matched by long-time Allied Whale associate and volunteer Gale McCullough, an avid citizen scientist in Hancock, Maine.

Founded in 1969, College of the Atlantic is a small college of some 345 students on the coast of Maine fostering interdisciplinary approaches to complex environmental and social problems. The academic program encourages hands-on, experiential learning and asks students to view the world as an interactive whole by bringing together traditional disciplines through the unifying perspective of human ecology.