This is a printer version of an UnderwaterTimes.com article.
To view the article online, visit: http://www.underwatertimes.com/news.php?article_id=48723961015 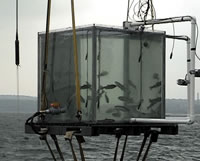 The University of Maryland team studied rainbow trout in this experimental tank at the U.S. Navy Sonar Test Facility in Seneca Lake , NY.

COLLEGE PARK, Maryland -- A new University of Maryland study in the July issue of the Journal of the Acoustical Society of America reports that high powered sonar, like that used by U.S. Navy ships, did not harm test fish, including their hearing, in a controlled setting.

The research team, headed by Arthur N. Popper, biology professor at the University of Maryland and expert in fish hearing, and Michele Halvorsen, Ph.D., University of Maryland Research Associate, found that exposure to high intensity, low frequency sonar did not kill rainbow trout used for testing, nor did it damage the fishes' auditory systems, other than for a small and presumably temporary decline in hearing sensitivity.

It is a finding that Popper says "should not be extrapolated to other fish species or the effects of other sound sources."

There is considerable concern that human-produced (anthropogenic) sounds added to the environment could have damaging effects on marine life. While much of the interest has focused on marine mammals, such as dolphins and whales, there is growing interest in the effects of these sounds on fish.

"The effects of sound on fish could potentially include increased stress, damage to organs, the circulatory and nervous systems," says Popper. "Long-term effects may alter feeding and reproductive patterns in a way that could affect the fish population as a whole."

In the limited existing research on the effects of sound on fish hearing and behavior, Popper and several other scientists have discovered that exposure to some very loud sounds, such as seismic air guns, can produce no effect, or result in a range of effects from temporary hearing loss to more lasting damage to the haircells of fishes' inner ears. Popper says, however, "It is hard to say that effects on one species indicates that another species will be affected in the same way by the same signal."

This study, funded by the U.S. Navy, was designed to look at the effects on fish that might be exposed to low-frequency sonar from a Navy ship sailing nearby. The specific sonar system the team examined was the Surveillance Towed Array Sensor System (SURTASS) Low Frequency Active (LFA) sonar, which uses frequencies from 100 to 500 hertz, the range of best hearing of many fish species.

In a special tank designed for the research, the team conducted "worst case scenario" tests, exposing fish to sound that was far more intense and for longer periods than they would typically receive in the wild when exposed to LFA sonar.

"The sound level the fish were exposed to is that found only within about 100 meters of a ship using LFA," Popper said. "And the exposure was for substantially longer than fish would encounter in the wild, where the sonar source is on a moving ship."

The test results showed no mortality associated with the sound exposure. "All fish appeared healthy and active until the end of our experimental week," Popper said. "But they had some small behavioral responses to the onset of the LFA signal, including a very short burst of swimming at the onset of the sound. What we don't know is how such responses may affect a fish's long-term behavior and survival, or what the potential cumulative effects of repeated exposure might be."

Co-author Jiakun Song of the University of Maryland used an electron microscope to examine the fishes' inner ears. The investigators found that sensory tissue of the inner ears did not show damage, even several days after the sound exposure. Examination of other tissues, such as the gills, heart, and brain by co-author Andrew Kane of the University of Maryland showed no effect on any tissues as a result of sound exposure.

Popper urges caution in applying several aspects of the study to other species and sound sources. "Extrapolation of these rainbow trout results to other non-salmonids or to fish with hearing specializations isn't possible, because there are differences in ear structures and hearing sensitivity between groups." Popper is planning such studies with other species in the near future.

The LFA signal is also different from other sounds marine animals might be exposed to. Elevated background noise from increased shipping, for example, has been shown to potentially have long-term effects on hearing sensitivity in some, but not all, species. "Air guns and pile drivers that have rapid onsets may have significantly different effects on fish, or no effect at all," Popper said.