This is a printer version of an UnderwaterTimes.com article.
To view the article online, visit: http://www.underwatertimes.com/news.php?article_id=47910361025 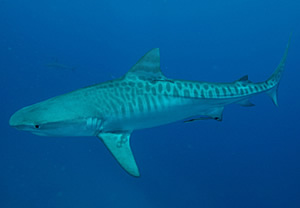 SYDNEY, Australia -- Using information from two global datasets collected by the International Union for Conservation of Nature (IUCN) and FishBase, the Australian team behind the study has compiled the most comprehensive database yet of information about sharks, rays and chimaeras (a deep-water fish which also has cartilage instead of bones) and the factors that put them at risk of becoming threatened.

Fishing, coastal development and habitat degradation, climate change and pollution have all been identified in the study as the major risk factors for global extinction. The research team also looked at characteristics that might predispose the three groups to becoming threatened, such as their large size, and whether they were fished or considered dangerous to humans.

"We concluded that the largest, most range-restricted and heavily harvested species could easily become threatened," said lead researcher on the project, Dr Iain Field. "Globally, poor management of coastal and high-seas fisheries is one of the greatest threats to shark, ray and chimaera populations. Habitat loss and degradation will further erode certain populations to the point where extinction risk rises appreciably, and there are likely to be threat synergies with climate change."

Field carried out the research while at Charles Darwin University, but was recently appointed the Deputy Director of Macquarie University's Marine Mammal Research Group. Associate Professor Corey Bradshaw from the University of Adelaide, Dr Mark Meekan from the Australian Institute of Marine Science and Dr Rik Buckworth from Northern Territory Fisheries also collaborated on the project.

Bradshaw said the view that sharks, rays and chimaeras - collectively known as chondrichthyans - have biological characteristics that predispose them to extinction was generally upheld by the research findings.

"Chondrichthyans tend to be larger than other fish and large body size generally correlates with slower growth and lower reproductive capacity," Field said. "They tend to grow slowly and have only a few young and yet all this rapid change is happening around them. It's the rapid pace of environmental change and harvesting with the greatest potential to restrict population growth.

"Those that are coastal dwellers are also likely to have increasing interactions with humans as human populations expand out along the coastline. More people will increase the demand for food and likely lead to further degradation of habitat and marine communities resulting from widespread pollution and human coastal development."

Field said a decline in chondrichthyan populations would have major consequences for the marine ecosystem. "These are large predators that have top-down control of other marine species - their survival and abundance is vital to the health of the entire system. So far there have been no extinctions of sharks, rays and chimaeras, but now is the time to act so that we may conserve and manage these species as a legacy for future generations."

Field and his colleagues have just had their paper published in leading international journal Advances in Marine Biology.