This is a printer version of an UnderwaterTimes.com article.
To view the article online, visit: http://www.underwatertimes.com/news.php?article_id=46317105892 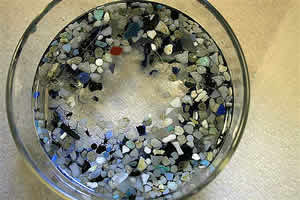 These small pieces of plastic were taken during trawls as part of a project to study their prevalence in the ocean. (photo courtesy of C-MORE project)

CORVALLIS, Oregon -- There is a lot of plastic trash floating in the Pacific Ocean, but claims that the "Great Garbage Patch" between California and Japan is twice the size of Texas are grossly exaggerated, according to an analysis by an Oregon State University scientist.

Further claims that the oceans are filled with more plastic than plankton, and that the patch has been growing tenfold each decade since the 1950s are equally misleading, pointed out Angelicque "Angel" White, an assistant professor of oceanography at Oregon State.

"There is no doubt that the amount of plastic in the world's oceans is troubling, but this kind of exaggeration undermines the credibility of scientists," White said. "We have data that allow us to make reasonable estimates; we don't need the hyperbole. Given the observed concentration of plastic in the North Pacific, it is simply inaccurate to state that plastic outweighs plankton, or that we have observed an exponential increase in plastic."

White has pored over published literature and participated in one of the few expeditions solely aimed at understanding the abundance of plastic debris and the associated impact of plastic on microbial communities. That expedition was part of research funded by the National Science Foundation through C-MORE, the Center for Microbial Oceanography: Research and Education.

The studies have shown is that if you look at the actual area of the plastic itself, rather than the entire North Pacific subtropical gyre, the hypothetically "cohesive" plastic patch is actually less than 1 percent of the geographic size of Texas.

"The amount of plastic out there isn't trivial," White said. "But using the highest concentrations ever reported by scientists produces a patch that is a small fraction of the state of Texas, not twice the size."

Recent research by scientists at the Woods Hole Oceanographic Institution found that the amount of plastic, at least in the Atlantic Ocean, hasn't increased since the mid-1980s â despite greater production and consumption of materials made from plastic, she pointed out.

"Are we doing a better job of preventing plastics from getting into the ocean?" White said. "Is more plastic sinking out of the surface waters? Or is it being more efficiently broken down? We just don't know. But the data on hand simply do not suggest that 'plastic patches' have increased in size. This is certainly an unexpected conclusion, but it may in part reflect the high spatial and temporal variability of plastic concentrations in the ocean and the limited number of samples that have been collected."

The hyperbole about plastic patches saturating the media rankles White, who says such exaggeration can drive a wedge between the public and the scientific community. One recent claim that the garbage patch is as deep as the Golden Gate Bridge is tall is completely unfounded, she said.

"Most plastics either sink or float," White pointed out. "Plastic isn't likely to be evenly distributed through the top 100 feet of the water column."

White says there is growing interest in removing plastic from the ocean, but such efforts will be costly, inefficient, and may have unforeseen consequences. It would be difficult, for example, to "corral" and remove plastic particles from ocean waters without inadvertently removing phytoplankton, zooplankton, and small surface-dwelling aquatic creatures.

"These small organisms are the heartbeat of the ocean," she said. "They are the foundation of healthy ocean food chains and immensely more abundant than plastic debris."

The relationship between microbes and plastic is what drew White and her C-MORE colleagues to their analysis in the first place. During a recent expedition, they discovered that photosynthetic microbes were thriving on many plastic particles, in essence confirming that plastic is prime real estate for certain microbes.

White also noted that while plastic may be beneficial to some organisms, it can also be toxic. Specifically, it is well-known that plastic debris can adsorb toxins such as PCB.

"On one hand, these plastics may help remove toxins from the water," she said. "On the other hand, these same toxin-laden particles may be ingested by fish and seabirds. Plastic clearly does not belong in the ocean."

Among other findings, which White believes should be part of the public dialogue on ocean trash:

There are other issues with plastic, White said, including the possibility that floating debris may act as a vector for introducing invasive species into sensitive habitats.

"If there is a takeaway message, it's that we should consider it good news that the 'garbage patch' doesn't seem to be as bad as advertised," White said, "but since it would be prohibitively costly to remove the plastic, we need to focus our efforts on preventing more trash from fouling our oceans in the first place."