This is a printer version of an UnderwaterTimes.com article.
To view the article online, visit: http://www.underwatertimes.com/news.php?article_id=46207110358 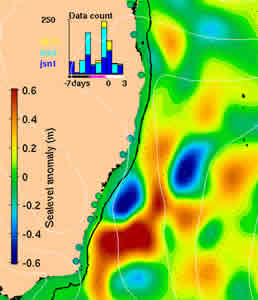 SYDNEY, Australia -- Oceanographers have identified a huge, dense mass of cold water off Sydney but know very little about what causes it or the influence it has in the Tasman Sea ecosystem.

“What we do know is that this is a very powerful natural feature which tends to push everything else aside – even the mighty East Australian Current,” says CSIRO’s Dr David Griffin.

“Until 20 years ago we would not have known they even existed without accidentally steaming through them on a research vessel,” he said.

“However, now that we can routinely identify them from space via satellite, marine scientists can evaluate their role as a source of life in the marine ecosystem.”

Reaching to a depth of more than 1000m, the 200km diameter ocean eddy has a rotational period of about seven days. Its centre is about 100km directly offshore from Sydney.

Ocean eddies can have a life of 2-3 weeks although similar eddies identified off South Australia and Western Australia are known to have survived several months.

In a complex cause-and-effect relationship, the East Australian Current is being forced to take a wide detour around the eddy off Sydney instead of flowing along the edge of the continental shelf.

In its centre, cold water from 400m is raised upwards some 200m. The sea surface, conversely, is lowered by 70cm. This dip in the surface of the ocean is invisible to the eye, but it can be accurately measured by the European and US satellites Jason-1, Envisat and GFO orbiting the Earth.

The upward displacement of the water was recorded by a robotic Argo float deployed by CSIRO as part of the international Argo program.

The cold-water eddy phenomena will be one of a wide range of issues to be discussed during a meeting which began in Hobart today of nearly 200 European, US and Australian scientists working with satellite altimetry – instruments that measure the height of the ocean to detect cold and warm water.