This is a printer version of an UnderwaterTimes.com article.
To view the article online, visit: http://www.underwatertimes.com/news.php?article_id=41951080267 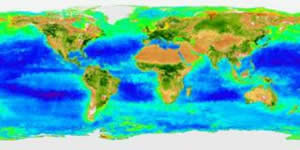 GREENBELT, Maryland -- The NASA-managed Sea-viewing Wide Field-of-view Sensor (SeaWiFS) instrument settled into orbit around Earth in 1997 and took its first measurements of ocean color. A decade later, the satellite's data has proved instrumental in countless applications and helped researchers paint a picture of a changing climate. NASA recognized the satellite's tenth anniversary today with briefings at the Goddard Space Flight Center in Greenbelt, Md.

NASA and GeoEye's SeaWiFS instrument has given researchers the first global look at ocean biological productivity. Its data have applications for understanding and monitoring the impacts of climate change, setting pollution standards, and sustaining coastal economies that depend on tourism and fisheries.

"SeaWiFS allows us to observe ocean changes and the mechanisms linking ocean physics and biology, and that's important for our ability to predict the future health of the oceans in a changing climate," said Gene Carl Feldman, SeaWiFS project manager at Goddard.

Researchers used SeaWiFS data to identify factors controlling the unusual timing of the 2005 phytoplankton bloom in the California Current System that led to the die-off of Oregon coast seabirds. The blooming tiny microscopic plants are key indicators of ocean health, form the base of marine food webs, and absorb carbon dioxide – a major greenhouse gas – from Earth's atmosphere.

"Long-term observations of the California coast and other sensitive regions is essential to understanding how changing global climate impacted ecosystems in the past, and how it may do so in the future," said Stephanie Henson of the University of Maine, lead author of a study published last month in the American Geophysical Union’s "Journal of Geophysical Research – Oceans." "This type of large-scale, long-term monitoring can only be achieved using satellite instrumentation," she added.

The SeaWiFS instrument orbits Earth fourteen times a day, measuring visible light over every area of cloud-free land and ocean once every 48 hours. The result is a map of Earth with colors spanning the spectrum of visible light. Variations in the color of the ocean, particularly in shades of blue and green, allow researchers to determine how the numbers of the single-celled plants called phytoplankton are distributed in the oceans over space and time.

In other research, Mike Behrenfeld of Oregon State University, Corvallis, Ore., and colleagues were the first to use SeaWiFS to quantify biological changes in the oceans as a response to El NiÃ±o, which they described in a landmark 2001 study in Science.

"The 2001 study is significant because it marked the first time that global productivity was measured from a single sensor," said Paula Bontempi, program manager for the Biology and Biogeochemistry Research Program at NASA Headquarters in Washington. "The simplicity of SeaWiFS – a single sensor designed only to measure ocean color – has made it the gold standard for all ocean color monitoring instruments."

More recently, Zhiqiang Chen and colleagues at the University of South Florida, St. Petersburg, showed that SeaWiFS data have direct application for state and federal regulators looking to better define water quality standards. The team reported in "Remote Sensing of Environment" that instead of relying on the infrequent measurements collected from ships or buoys, SeaWiFS data can be used to monitor coastal water quality almost daily, providing managers with a more frequent and complete picture of changes over time.

Beyond the realm of ocean observations, however, SeaWiFS has "revolutionized the way people do research," Feldman said. SeaWiFS was one of the first missions to open up data access online to researchers, students and educators around the world. The mission was able to capitalize on advances in data processing and storage technologies and ride the crest of the World Wide Web's growth from its beginning.

When the SeaWiFS program launched in 1997, the goal was to place a sensor in space capable of routinely monitoring ocean color to better understand the interplay between the ocean and atmosphere and most importantly, the ocean's role in the global carbon cycle. A decade later, Feldman said, "SeaWiFS has exceeded everyone's expectations."